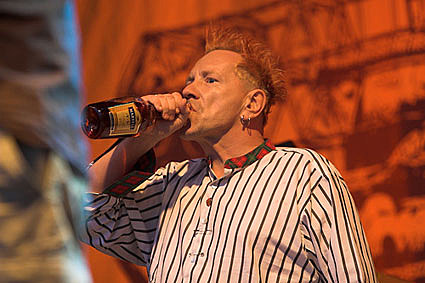 Is John Lydon aka Johnny Rotten of the Sex Pistols on a mission for as much press as possible? If so, it's working. First came the incident with Bloc Party's Kele which also involved the Foals and which Lydon denied has anything to do with racism. Since then:

The Sex Pistols demanded a fence be erected around their toilet at a music festival last weekend. The punk rockers reportedly didn't want to share their private toilet and asked for a high security barrier to keep people out at Scotland's Live at Loch Lomond festival. Frontman John Lydon - also known as Johnny Rotten - was also said to be incensed when he realised electro band Autokratz were being driven around the event in a better car than his band, and demanded the vehicles were switched. Autokratz singer David Cox told Britain's Daily Star newspaper: "The Sex Pistols had two Land Rovers to ferry them around the site but Johnny seemed to prefer our car.

"So he made us take all our equipment out so he could travel 40 metres in it."

Once the switch had been completed, John allegedly shouted: "Autokratz, as we have taken your Auto you are now just Kratz."... [New Zealand City]

[Lydon] addressed the racist row that he was caught up in over the last 10 days when he sang a song about Allah and Jesus. He sang: "Allah be praised, George Bush be erased. Hello, Allah. Hello, Jesus too." He then told the crowd: "That is a little challenging to some of you. "So just in case you missed it the f****** papers had the f****** liberty to call me a racist. "I say hello, Allah. I'd like to buy Allah a f****** good pint of larger." Rolling up his sleeve, he berated fans saying: "Are you our friends? Well then, drink your beer instead of throwing it, you f****** idiot." Johnny also had a dig at Coldplay, saying: "This is audience participation 100 per cent. We're the Sex Pistols, not f****** Coldplay." And Rotten had a pop at Happy Mondays. They were head lining the Good Vibrations stage while the Pistols were on the main stage. The godfather of punk said: "Is there anybody there? Is there anybody over at Happy Mondays? That's a shame.".. [The Daily Record]

John Lydon has reportedly said he will not be apologising to Duffy, after he allegedly swore at the Welsh pop star in June causing her to cry

It was claimed by several media sources in June, that the Sex Pistols frontman shouted "F*** off you c***" at the 'Mercy' singer, after she approached him from behind and tried to hug him at the Mojo Awards - whilst the punk legends were having their photo taken.

The Daily Record quotes Lydon as now saying: "Listen, barmaids across the universe cry over me nightly. What makes this one special? It's a poor young girl who made the mistake of trying to jump on my back." [AngryApe]

Lydon, who is also known by his stage-name of Johnny Rotten, claimed Winehouse's music doesn't mean anything, arguing that it wasn't "moving", "inspirational" or "cultural".

"Doherty's got trapped in a publicity campaign that has run out of order.

"Another fool who is given a golden opportunity to do something wonderful in his life and he'd rather be selfish and cowardly. Drugs are the modus operandi of the coward.

"Pete is a fine lad that needs to sort himself out. This is Mister Rotten telling you I waltz on stage sober because no drug in the world is as good as being absolutely 100 percent honest with your audience. Nothing compares to that emotion. People like him and Amy Winehouse are getting it wrong as usual." [Daily Record]

Ok, He's got a good point on that last one (but what is that in his hand in the top picture?).