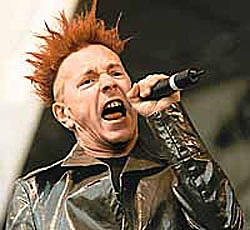 Speaking to the BBC's One Show about racial attitudes, Lydon said: "My grandchildren are Jamaican right."

"This is an absolute offence to them and me when I read stories like that, that are allowed to go to print absolutely unfounded and have the liberty to take liberties with a man like me and call me a racist when my entire life has proved exactly the opposite." When asked if he was a racist, Lydon replied: "Absolutely not. And any bugger that dares say so is going to have their day in court with me - you understand this?"

During his interview, Lydon also reaffirmed comments made in his initial response to Okereke's allegations that stressed the Sex Pistols' multi-racial appeal.

"It's the most wonderful thing ever, playing to our multi-racial audiences, which they always have been," he said. "And not only that, multi-gender, multi-everything-you-like, we are open to all. Our whole message in life has been to eliminate the barriers that separate us."

He added that the Sex Pistols "only true enemy in life is governments". "And politicians, and, low and behold, the British press," he added. [GigWise]