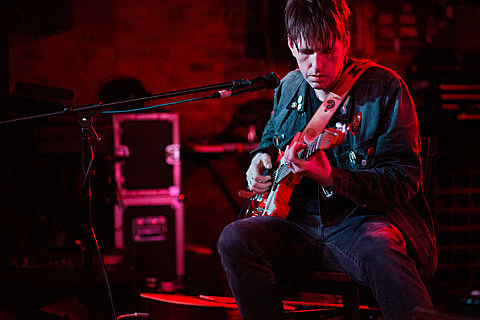 John Murry's album The Graceless Age was more of 2013's more lauded if underheard albums, making best-of lists in MOJO, The Guardian and others. The latter said:

Through stories that are partly his own - the centrepiece, Little Colored Balloons, ends with Murry's overdose ('I took an ambulance ride - they said I should've died, right there on 16th and Mission') - Murry invests the South with a necromantic realism, where decay is the one constant, but he somehow avoids self-pity or lachrymosity. I don't expect to hear a better album this year.

You can stream The Graceless Age in full below. Murry also just released the Califorlornia EP which features a couple collaborations with onetime Green on Red singer Chuck Prophet. Stream two tracks from the EP below too.

John Murry and Chuck Prophet are currently on tour together and will stop in NYC next week for a show at The Bell House on November 21. Bobby Bare, Jr. is on the bill too and tickets are still available. Before that, John Murry will play an intimate show in Hi-Fi Bar's back room on November 17. The show is technically free but donations are suggested.

As for Prophet, he recently released Night Surfer via Yep Roc. You can check out the video for single "Ford Econoline" along with the list of dates and those other streams, below...