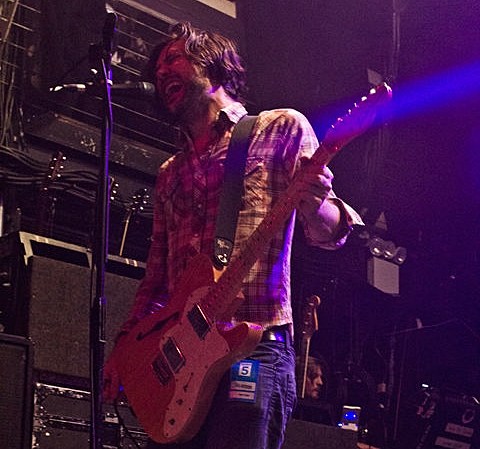 The No Sleep Records CMJ showcase (which BV co-presented) went down this past Tuesday (10/21) at the Paper Box and was headlined by Taking Back Sunday/Straylight Run's John Nolan, who was joined by a backing band. He's now put out the video for his new solo single "Here Comes the Wolf" which appears on the soundtrack to Jason Michael Brescia's new independent drama/comedy Bridge And Tunnel. The video just premiered over at AltPress. You can watch it, with a clip of John playing "Existentialism on Prom Night" at the No Sleep show, below.

John will team up with The Movielife/I Am the Avalanche's Vinnie Caruana to headline the soundtrack's release show in NYC on December 29 at Webster Hall. (It doesn't specify which room, but presumably the Studio or the Marlin Room since Patti Smith is in the Grand Ballroom.) Ticket info is still TBA too. Vinnie also has a solo song on the soundtrack which you can stream below.

The Webster Hall show is the day after the two Taking Back Sunday holiday shows in NJ. Night 1 is with The Menzingers, night 2 is with Modern Baseball and tickets for both are still available.

John Nolan at No Sleep CMJ

Last night was very surreal. Thank you @thejohnnolan and @dylanebrahimian for having me play a few songs with you guys it was an honor. And thank you to everyone who came and supported and @chiarellifest for catching this video. #JohnNolan #StraylightRun #TakingBackSunday #NoSleepRecords #Slayer

Vinnie Caruana - "It's Been Way Too Long"