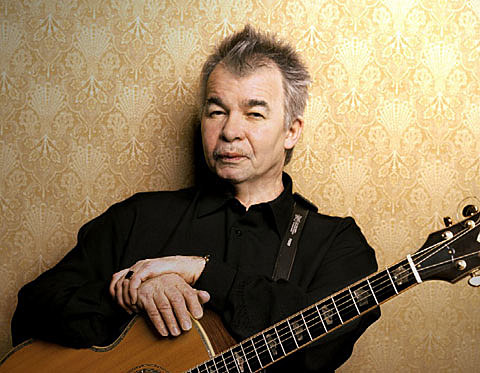 Bill Flanagan: How about John Prine?

Bob Dylan: Prine's stuff is pure Proustian existentialism. Midwestern mindtrips to the nth degree. And he writes beautiful songs. I remember when Kris Kristofferson first brought him on the scene. All that stuff about "Sam Stone" the soldier junky daddy and "Donald and Lydia," where people make love from ten miles away. Nobody but Prine could write like that. If I had to pick one song of his, it might be "Lake Marie." I don't remember what album that's on.

Earlier this year, some of Prine's fans (Deer Tick, Josh Ritter, Conor Oberst, Drive By Truckers, Those Darlins and My Morning Jacket included) put out a record of his songs, Broken Hearts & Dirty Windows (it's still streaming here). Prine performed with MMJ's Jim James on Letterman in May; that video is posted again below.

Prine released his own album in 2010, a live collection entitled In Person & On Stage. Before his show at the Beach, Prine plays Newport Folk Festival on Saturday, July 31st, and has a sold-out performance at Tarrytown Music Hall on August 1st. He has tour dates throughout August and September in Canada and the US.

Those dates and videos plus an epic, nine-minute version of Bob's favorite, "Lake Marie," are below...