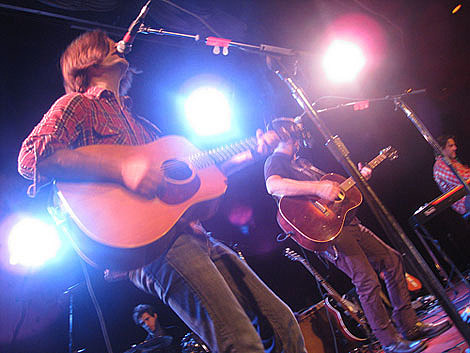 John Roderick of the Long Winters is the opener of the Ben Gibbard & Jay Farrar Kerouac-tour that ends with a show at Webster Hall in NYC tonight (10/28). Tickets are still available. John will then stick around for a day, and headline his own show at the intimate Union Hall in Brooklyn on Thursday (1/29). Tickets are on sale for that too.

Greg Kot was at the Gibbard/Farrar show in Chicago the other day...

"The one-week old band," as Farrar called it, devoted the show to playing the album in its entirety, plus a handful of loosely related songs: Farrar's "Voodoo Candle," Bob Dylan's "Absolutely Sweet Marie" and Tom Waits' "Old Shoes (And Picture Postcards)."

The "Big Sur" songs put the focus squarely on Kerouac's lyrics, which detail the dissolution of a drunk looking for sobriety and inspiration in a cabin on a remote stretch of the California coast. The material's tailor-made for Farrar: His voice has a natural slope to it, an ache that shades even his most optimistic sentiments, and his melodies are steeped in mourning.

Videos from the show in LA, below...