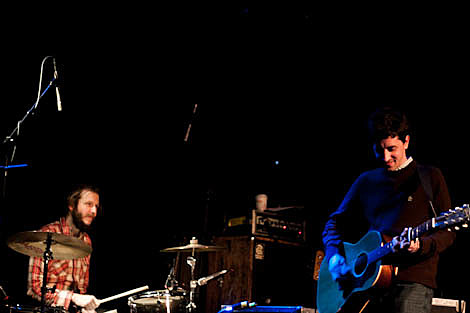 John Shade, who made his live debut at the BV/BP Haiti benefit at Music Hall of Williamsburg that Justin Vernon (Bon Iver) also played, recorded his debut album at Bon Iver's studio in Wisconsin late last year. Early this year, Shade recorded another version of the record (with string quartet) - it was produced by Paul Kolderie (Pixies, Radiohead, Hole, Dinosaur Jr, Warron Zevon, etc). Paul offered to make the record after coming to a John Shade gig in Boston. We posted an MP3 from that session in our announcement of John Shade's next (and 2nd) NYC show which happens (with string quartet) at Mercury Lounge tonight (Monday, 4/12). John also plays Lizard Lounge in Cambridge on Wednesday (4/14).

Justin Vernon and John Shade sat down (in front of their respective computers) and had an IM chat about various topics including John's new record, movies, books, and sometimes I'm not sure what. That conversation, and more (never-before-seen) pictures from the Haiti benefit, below... 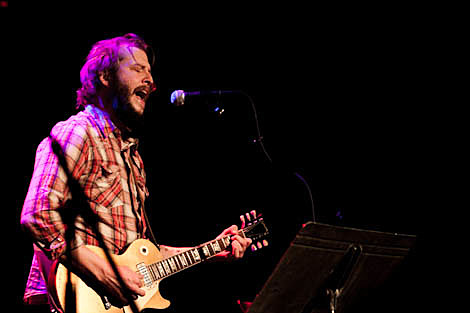 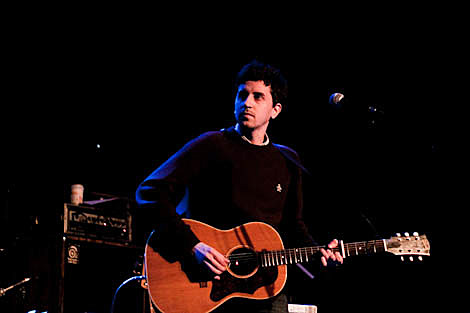 Justin Vernon: I've listened to your album, many times. There is a cool insignificance and aloofness, without being insincere. Good job?
Yes. Good job, I say.

John Shade: Thanks. That sort of thing is what inspired the name John Shade.

JV: Tell me about John Shade.

JV: When you write songs...are the songs coming from a conscious place? sub? are they auto-biographical in nature? TOPICAL?

JS: The songs combine bits of non-fiction. To create a sort of fiction that's still real to me. Personal.

JS: So they are in a way autobiographical and topical, but not an "account" of events...

JV: Tell me about how your record was made?

JS: Well, Justin, I had some friends who were kind enough to invite me to their house to record it. You'd love these guys.

JV: It was me and my brother's house.

JS: In a word? Yes. The thing I kind of forgot about is how the album came together at the time. Jeremy Boettcher, Ben Lester and John DeHaven gracefully appeared from thin air.

JV: Yeah. Great Eau Claire [Wisconsin] based crew. How did they get involved?

JS: I met Ben and John at the Cape Cod Bon Iver show. [Your brother] Nate [Vernon] introduced me to Jeremy On The Spot. We happened to all be in Eau Claire at the same time. We all got a little obsessed and melted into the self-induced cabin fever of the week.

JV: Tell me about some of your favorite sounding songs on the record. Sound being the key word.

JS: I love the piano on So Long, Theresa. And the guitar on Lullaby. I really like the snare sounds in general. Amazing how much a t-shirt can do.

JV: Which t-shirt was it? Did it have a tiger on it?

JS: Close. It was on a tiger, actually. Took us forever to get it off him. But I think it was worth it.

JV: Well, there is an old vet clinic in me and Nate's house, so... i'm sure if there was any injuries...

JS: That's right...i was looking for ghosts of old dogs

JV: My favorite thing Jimmy Jarmusch ever did was guest spot on John Lurie's "Fishing With John." Brilliant.

JS: Oh man. I think they went shark fishing. You know, Down By Law somehow had a big influence on my record...

JS: I don't know...the film stuck with me and somehow kept poking its head into songs. Lyrically I suppose. Weird.

JV: It's a beautiful film. Benigni and Waits together makes great on screen vibes.

JV: How would you say it crept into the songs?

JS: I think ur a contra.

JV: Tell me about the guitar that wrote these songs with you.

JS: The guitar breathes, which was weird at first since it doesnt have a mouth. Mouth rhymes with-

JS: Yeah. It's older than me, which is somehow crucial.

JV: Crucial. Do you think your album will outlast you, as a person?

JS: I suppose it will, if for no other reason than THE INTERNET. Timeless. No vintage. Nothing's antique?

JV: Oh, I don't know. I think there will be some kind of internet failure at some point.

JV: Well, I'd have to say my favorite track on the record is Little Heart, tell me about that a little bit.

JS: The strings on it are 3 Jeremy Boettchers.

JV: How did Nate record that? Do you remember? They sound like cellos. But rich deeper box sound only an upright can get.

JS: Remember that time we caught on fire and died? It's as if it never happened. Did it?

JV: I remember when we drank our selves to death, riding in your mustang.

JS: That's right. What would I have been reading?

JS: Hey I bought you a copy of Catcher In The Rye, then J.D. Salinger died. Coincidence?

JV: It is a coincidence. A HELL of one. What other music will you listen to today?

[everything after this point is too racy for the internet] 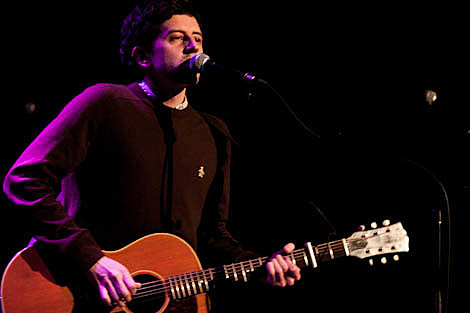 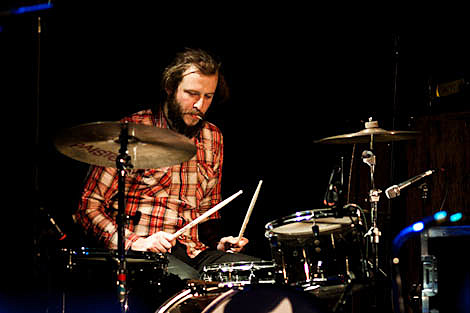 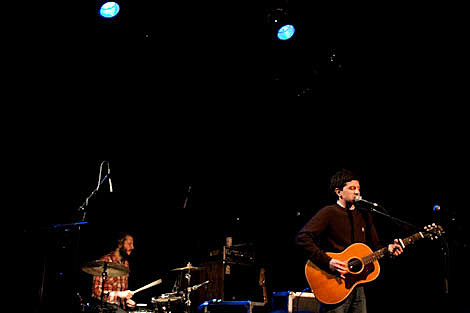 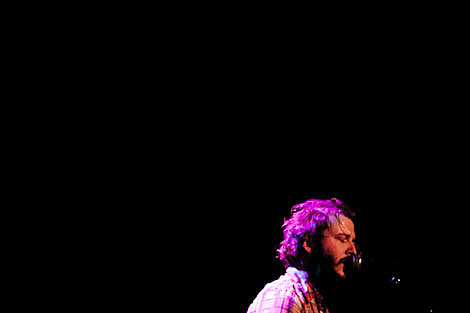 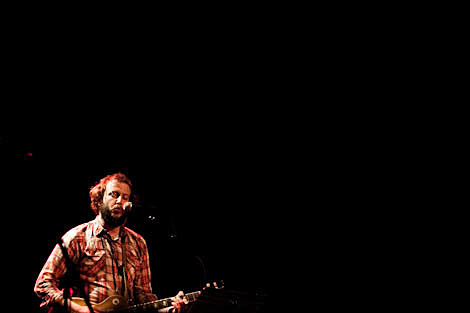 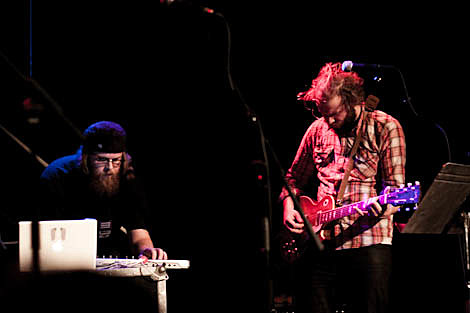 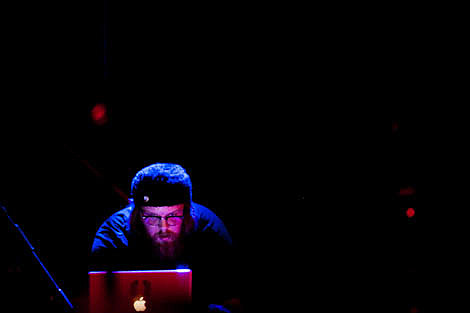 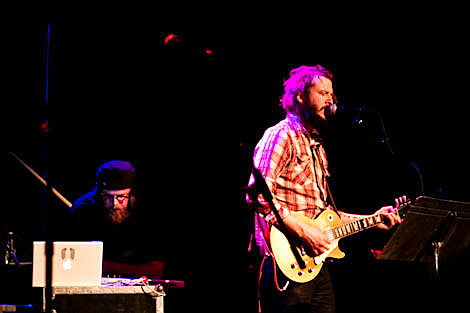 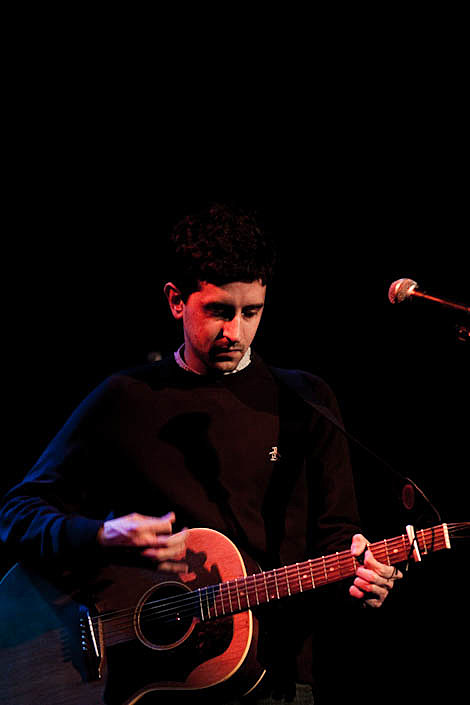