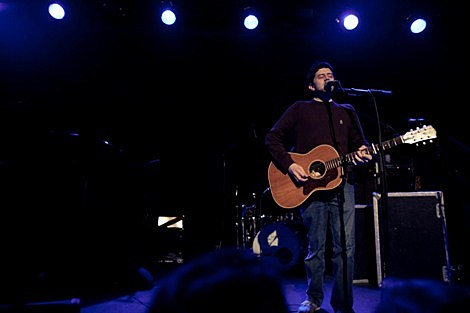 John Shade, project of songwriter Dave Godowsky, made his live debut at the BrooklynVegan/Bowery Presents Haiti relief benefit at Music Hall of Williamsburg in January. His 2nd NYC show will take place at Mercury Lounge on Monday, April 12th.

John Shade's new song "Here I Am" (downloadable above) was arranged by Zack Hickman (Josh Ritter's bassist) who will be playing bass with Shade at the NYC gig. The Neave Quartet (a string quartet) will also be part of his band like they were when he performed four shows recently in Boston and one in Maine. Sean Greenhalgh of Clap Your Hands Say Yeah will be on drums. Tickets for the NYC show are on sale (Soft Landing and Actualities are also on the bill).

Shade's debut, All You Love Is Need, is available as a name-your-price download. As Shade pointed out on stage at Music Hall in January, that price can be free if you want, or as he writes...

Or just enter $0.00! But if you do that, you have to promise to rave to your friends about how amazing the album is.

John's only other upcoming date is an April 14th show in Cambridge, Mass. A video of his live debut (which featured Justin Vernon on drums) is posted below...