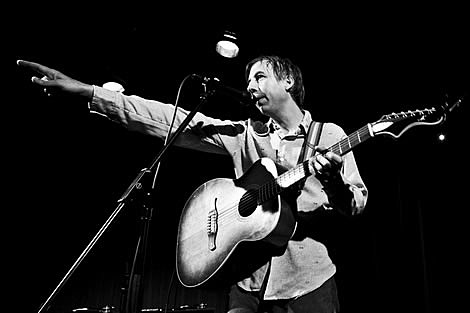 As previously reported, John Vanderslice will be playing a show at the Music Hall of Williamsburg with The Tallest Man on Earth on Friday, June 12. That show is part of the Northside Festival and is presented by Brooklyn Vegan and we'll be adding two more bands to the bill (soon, hopefully). Tickets for the show are still on sale, as are 4-day Northside Festival passes which may also get you in.

The show it turns out is part of a bigger tour with the Tallest Man on Earth that now also includes a non-Northside Bowery Ballroom show on Saturday, June 13th. Tickets for that new show are also on sale now. JV will play last at Music Hall, TMOE, who recently sold out the same venue by himself, will play last at Bowery.

John's new album, Romanian Names, comes out May 19th on Dead Oceans. Info about the preorder for that record, which includes a chance to download it more than three weeks before it comes out, is below. Two tracks from that album are posted above.

As previously mentioned, John Vanderslice also recorded a new album with The Mountain Goats. The limited edition EP has since been released. It's called Moon Colony Bloodbath.

Vanderslice will be performing as a five-piece band on this tour, which stretches across the US from May to June, and includes performances at the Ottawa Bluesfest on July 12th, San Fran's Outside Lands Festival at the end of August, and Austin City Limits on October 3rd.

All tour dates and info on the album presale below...

If you pre-order Romanian Names now on CD or LP, you'll get an immediate download of the album right then and there. How's that?! Good, right? If you're one of the first 100, you'll also receive a limited-edition, letterpressed wallet containing a small snippet of analog tape, which contains unused music from the master recording of Romanian Names, straight off the Tiny Telephone cutting-room floor. The music on the tape is yours to do with as you will. If you come up with something interesting, please do send it over for inspection!

* w/ The Tallest Man on Earth
+ w/ The Morning Benders