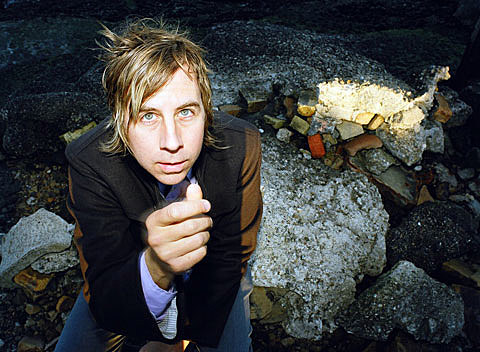 To say that John Vanderslice's experiment with Kickstarter was a success is an understatement. Not only has he released both Dagger Beach (an album of all new originals) and a song-for-song cover of David Bowie's Diamond Dogs, he raised almost $80,000 and has been releasing sepcial fan gift songs too. One of those is "Song For Clay Miller", "a song written for, and released exclusively to the 1,200 supporters of his campaign" and for a few people who buy the limited Flexi Disc version. Listen to the song below, and to "Vitas At Wimbledon" which is also on the disc. The MP3 above is from Dagger Beach, as is "How The West Was Won" which is in video form below.

John will head out on tour this fall, hitting Illinois in time for Halloween and NYC at Mercury Lounge a few days later. Tickets for the 11/5 NYC show with Samantha Crain go on sale this Friday (8/16) at noon. All dates are listed with the songs, below...

John Vanderslice - "How The West Was Won" from john vanderslice on Vimeo.