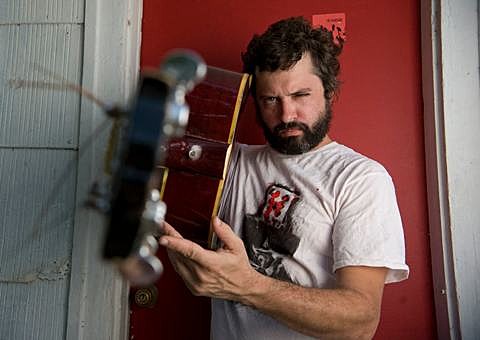 To call Austin's John Wesley Coleman a musician doesn't really do him justice. He also paints, writes and is a funny, charming on-stage banterer/storyteller. He's a great songwriter, too. Last year he released The Last Donkey Show via Goner and back in April knocked-out Trans Am Summer Blues via Tic Tac Totally, and will release The Lizard of Pop in early 2014 for Burger.

Coleman is currently on tour and will play two shows in NYC, both with Memphis garage rockers The Sheiks: tonight (10/23) at Death by Audio with The Beets' Juan Wauters and Mail the Horse; and Cake Shop on Friday (10/25) with more bands TBA.

All JWC dates (many of which but not all are with The Sheiks) are listed, along with a couple videos and a Sheiks album stream, below...