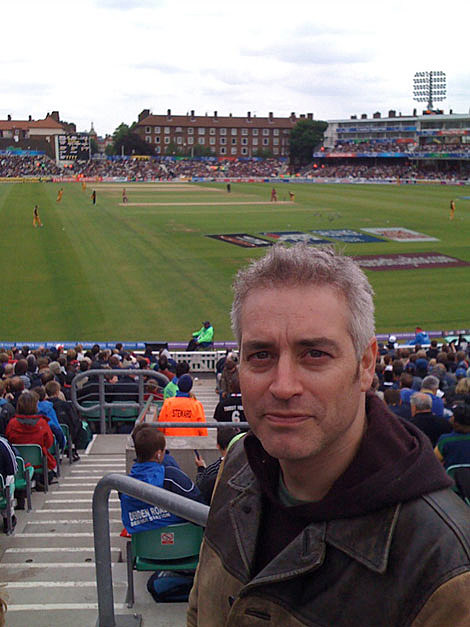 As you can see above, John Wesley Harding has been taking a vacation abroad (documented on both his Twitter and MySpace blog). It wasn't all fun though -- the trip included a set of overseas shows too. Actually, hopefully those are fun too.

Harding's next show will take place July 8th at Boston's Museum of Fine Arts. After that, Harding has a few full band gigs scheduled. John and friends come to the NYC area for a show at the Bell House on July 25th. Tickets are on sale. No word on which friends he'll bring with him, though we're willing to bet one of them will be Eugene Mirman who is also performing at the Brooklyn venue less than a week earlier.

JWH will be starting up his "Cabinet of Wonders" shows again too. That monthly residency at (Le) Poisson Rouge runs September 16th, October 7th and November 18th. No lineups have been announced, but past event fixtures have always included Eugene Mirman, and other authors and musicians.

Before those dates, Harding jumps on another friend's revue -- "Are You Worried About the Rising Cost of Funerals?" hosted by Errollyn Wallen at LPR on Tuesday, July 14th. Others on that bill include Margaret Leng Tan, Rita Porfiris, David Grand and Djonque.

Tickets for all of the John Wesley Harding LPR shows are on sale.

Harding's Cabinet of Wonders revue last visited NYC on April 15th, after a national March/April tour. If you're wondering, What the hell actually happens at these Cabinet of Wonders things? You can check out our coverage of the event's February 11th, March 11th and April 15th performances at LPR. Or look at the performer/set list chart from one of the most recent CoW events in Pittsburgh, with all tour dates, below...