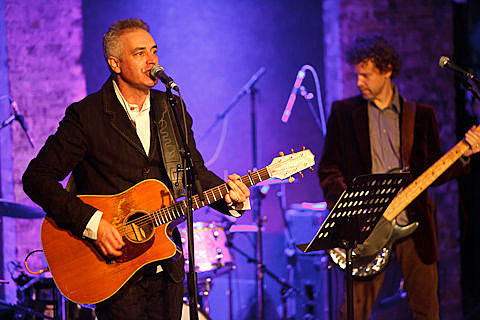 John Wesley Harding (aka Wesley Stace) has been up to a lot this year, as usual. He finally gave his 1996 album, John Wesley Harding's New Deal, its first-ever vinyl release last month via Yep Roc. He's also set to continue his guest-filled Cabinet of Wonders variety shows at City Winery. The next happens at the NYC venue on September 8 with Sam Amidon, Todd Barry, Iris Dement, Ben Marcus and STEW, followed by shows on October 19 and November 16. The guests for the second two shows have not been revealed yet. Tickets for all three Cabinet of Wonders shows are on sale now.

The September 8 show falls right in the middle of John Wesley Harding's upcoming tour with progressive folk vets Strawbs, who will be playing acoustic.. That tour hits the NYC area on September 7 at Outpost in the Burbs in Montclair, NJ and September 11 at BB King's. Tickets for both NYC area shows are on sale now. Strawbs also play Strand Theater (9/8) in Lakewood, NJ the day that John Wesley Harding does his Cabinet of Wonders show at City Winery. All dates on the tour are listed below.

John Wesley Harding will also be hosting one of the shows in BAM and Greenlight Bookstore's Unbound literary series. He'll host the Gary Shteyngart Roast that happens on November 20 at BAM Harvey Theater with Kurt Andersen, Jay McInerney, Sloane Crosley, and others TBA. The full Unbound schedule is below.

All lists of dates and that schedule are below.