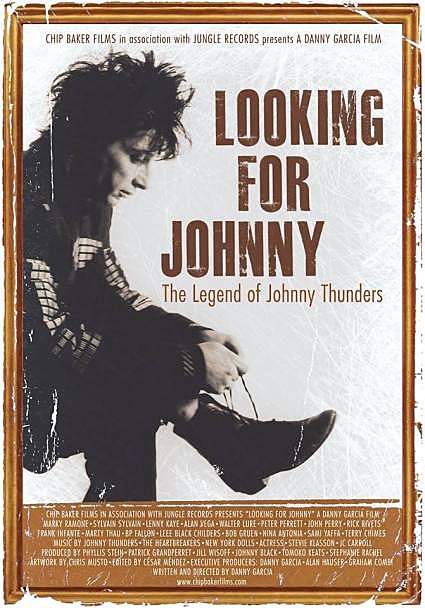 The 14th Annual Coney Island Film Festival runs from September 19 - 21, 2014. Things kick off tonight with an opening night party and a single screening, and then you can spend all day Saturday and Sunday watching movies in Coney Island. Titles include "Brooklyn Slice", "Keep It Real: Banksy NYC", "The Birth and Death of the BTK Band", "Passage To Coney Island", "Last Night in Astroland", "Samuel's Game", "Famous Nathan", "Looking For Johnny", and of course "The Warriors".

Looking For Johnny is a documentary about the late New York Dolls and Heartbreakers guitarist Johnny Thunders, and it will be making its NYC premiere at the Coney Island film fest. $8 will get you into the Saturday, 3pm screening AND Q&A with "some of the punk period musicians who appear in the film."

Clips from the film with more information below...

Looking for Johnny: The Legend of Johnny Thunders, a feature documentary by director Danny Garcia, will have its Brooklyn premiere this weekend as an official selection of the 2014 Coney Island Film Festival. The Q&A to follow the screening will include some of the punk period musicians who appear in the film.

On April 23, 1991, the legendary, hard-living rock'n'roller Johnny Thunders was found dead under mysterious circumstances in a New Orleans hotel room. The news came as a shock to his legion of devotees who perceived him as an enigmatic outlaw. Indeed, from his start as lead guitarist and founding member of the New York Dolls, Johnny Thunders refused to play the corporate game and was both elevated and damned for it. He continues to be cited as an influence by successive generations of musicians.

Garcia was seized by a question that wouldn't let go - 'just who was Johnny Thunders?' A Spanish filmmaker, Garcia spent 18 months travelling across the USA and Europe, filming interviews with fifty of the people who were closest to Johnny, building a compelling narrative drawn from first hand testimonies that explore his life, his musical legacy, and the theories that continue to swirl about his death.

Looking for Johnny is the second feature documentary about rock legends by Garcia. In 2012 he completed The Rise and Fall of the Clash, a definitive biography released to critical acclaim of that group's fall from grace while climbing the ladder of success.

Looking for Johnny 40 songs include Born To Lose and You Can't Put Your Arms Around a Memory, and historic film of Johnny's live performances from all periods, including previously unseen New York Dolls and Heartbreakers footage and photos. Looking for Johnny has successfully premiered regionally across the USA, Canada, internationally in the UK, Sweden, Norway, Spain and France. There will be DVD, digital film distribution; vinyl and CD soundtrack album distribution.

Advance ticket purchase strongly recommended. There are no extra service fees to purchase in advance. All tickets sales are non-refundable.

NOTE: No tickets will be mailed no matter what shipping method you choose, they are available at Will Call, on the day of the screening.