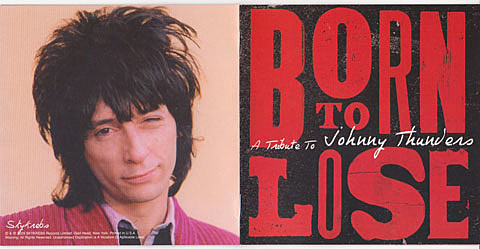 Johnny Thunders would turn 59 Friday (7/15) and his birthday is being celebrated tonight (7/14) at D-Generationer Jesse Malin's LES club Bowery Electric. There will be a number of artists performing including Heartbreaker Walter Lure's The Waldos, Oddball Alison Gordy, Pillbox who are apparently reuniting, and many others that are listed below. There will also reportedly be some special guests including ex-Dead Boy Jeff Magnum (NOT TO BE CONFUSED WITH JEFF MANGUM OF NEUTRAL MILK HOTEL), Jesse Malin, Andy Shernoff of The Dictators, Lenny Kaye and many others.

Many of those playing appeared on the 2009 "Skykrebs Records"-released "Born To Lose" tribute 3CD Boxed set. That includes Krebs & The Maynard G's, The Waldos and Alison Gordy.

Before there was a Strokes to make it safe as milk, the snarly glam punk spirit of the Stooges, New York Dolls and Dead Boys lived for a time in the skinnyassed tattooed bodies of Pillbox, a New York quartet which offered a skankier, more menacing and less theatrical alternative to the likeminded and better-known D Generation.

Check out the Pillbox video for "Holly" below.

Lenny Kaye, who will supposedly be a special guest at the show tonight, is a longtime member of the Patti Smith Group. Patti Smith plays a free show at Castle Clinton tonight (7/15). Don't forget that, "FREE TICKETS AVAILABLE FIRST-COME, FIRST-SERVED AT THE GATE STARTING AT 5PM. DOORS OPEN AT 6PM." People are already in line as of 2pm. It would be cool of Patti ended up at the Johnny Thunders party afterwards too.

Full Bowery Electric lineup and the Pillbox video below...