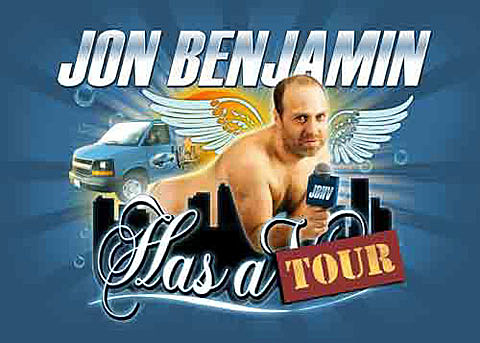 Speaking of Comedy Central, one of the most egregious errors they ever made was cancelling the great Jon Benjamin Has a Van. CC has canceled many, many, many shows over the years and most of the time it was the right move because a lot of their original programming is/was horse shit. However, the loss of JBHAV really stuck in my craw. Jon Benjamin starred as a man on the street reporter, with a van, who always became a part of the stories he was reporting. The show was so goddamned funny I curse the day it was ever canceled. However, GOOD NEWS EVERYONE! Jon left this note on my pillow this morning (he calls me America) (You had to be there) (be glad you weren't):

HI AMERICA, it's me again, Jon Benjamin. I know we haven't spoken since my bar mitvah speech (sorry about my controversial opposition to the IDF's 1978 attack on Lebanon) Anyway, I made a show in 2010 called Jon Benjamin Has a Van and after a full season, myself, Leo Allen and Nathan Fielder decided to celebrate our middling ratings by launching a tour. Soon thereafter, Comedy Central cancelled our show, but the tour will still go on. So, without further adieu, I formally announce our Cancellation Tour. We will be in 7 cities over the course of ten days (a national record) and we'll perform comedy, magic and show uncensored footage and deleted scenes from American Reunion. It will be cheap, fast and easy. Thanks and hope to see you there. Love, Jon.

The Jon Benjamin Has a Tour tour will hit The Knitting Factory in Brooklyn on Thursday May 3rd. Tickets are on sale so get them while you can, because this will sell out and you. will. be. bumming. Full tour dates below.

Speaking of comedy at the Knit, it has been announced that Neil Hamburger will be playing there on a tour too.

Check out JB's tour dates and a video below...