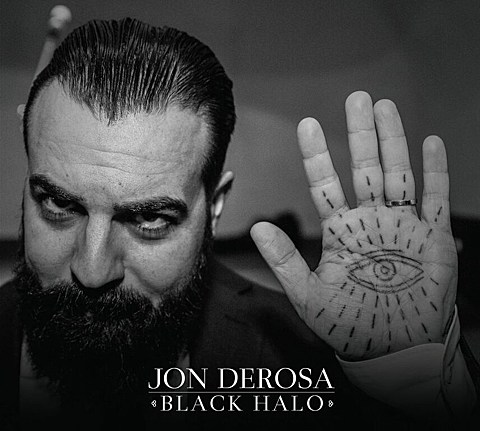 For the recording of Black Halo DeRosa returned to Brooklyn to work with his musicians and long time collaborator and producer Charles Newman (The Magnetic Fields, Soko, Gospel Music). The two returned to Los Angeles for further tracking and vocals, and to work with multi-instrumentalist Brad Gordon (The Weepies, Dan Wilson) on the orchestral arrangements (Brad also co-wrote "Blood Moon" with DeRosa). The record features vocal contributions from the exquisite Carina Round (Early Winters/Puscifer), as well as the DeRosa/Round co-written duet "Dancing In A Dream." Finally, a most notable collaboration comes in the shape of "When Daddy Took The Treehouse Down," which DeRosa co-wrote with the inimitable Stephin Merritt (The Magnetic Fields).

Jon DeRosa, who's been in bands dating back to the '90s including Dead Leaves Rising, Aarktica and Pale Horse and Rider, released his second solo album last week/month, Black Halo. It follows 2012's A Wolf In Preacher's Clothes. As the quote above points out, it features a collaboration with The Magnetic Fields' Stephin Merritt, and like Merritt, DeRosa is a crooner and a balladeer. You can hear for yourself by streaming the entire album below.

Jon DeRosa has two release shows for the new album coming up. One is in NYC TONIGHT (6/3) at Saint Vitus with Bootblacks and La Cruor. Tickets are on sale. He then plays another one in his hometown of LA on 6/18 at Troubadour with Motopony. Tickets for that one are on sale as well. No other dates are announced at the moment.