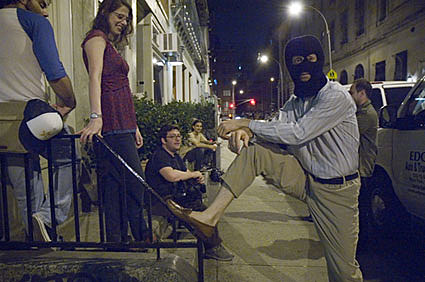 In my last Comedy Canon I devoted a lot of keyboard time to news about awesome comedians and the TV shows they're working on. But I totally missed one. A big one. But let's backtrack a bit.

Last summer I was at a mega-packed Greg Johnson and Larry Murphy show at Rififi. At one point in the evening I ran into Human Giant #4 and all around totally awesome dude Jason Woliner. We chatted a bit and I eventually asked him what he'd been up to besides HG. He mentioned that he was working on a pilot for Adult Swim with Jon Glaser.

Flash forward to September 2007. Eugene Mirman sent out a myspace bulletin in which, among other things, he mentioned that he was "in a live action pilot for Adult Swim that stars Jon Glaser as a guy in the witness protection program with his own reality show. He wears a ski mask the whole time. It's very funny and will maybe get picked up. I play the mobster trying to kill him". I wondered if that was the show Jason was talking about at Rififi.

Ends up, it was! The Human Giant Production Blog posted this recent message....

Congratulations to our friend Jon Glaser - his pilot "Delocated" just got picked up by Adult Swim!

You might remember Jon as the Devil in Human Giant season 1's Exorcism sketch, and he's got a few guest appearances coming up in season 2. He was also a consultant on our show, writing pieces like Let's Go!, Blood Oath, and Commercial Jingles. Our director Jason Woliner shot and edited the pilot for Delocated. The two of them got coffee the other day in Park Slope. Jon got some kind of egg dish and Jason opted to just get a cappuccino.

This is truly exciting news. There are a lot of people out there like me who are completely bonkers about Jon Glaser and have always wanted more than his cameos, voice work, and all-too-sparse live appearances. I can't wait to see what happens. 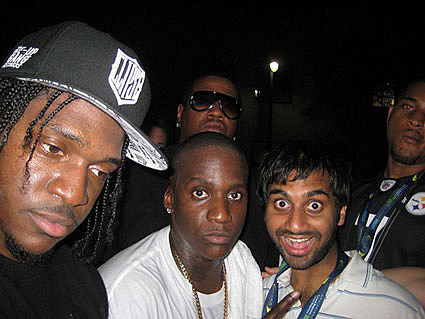 Tickets are on sale for an April 1st Human Giant show at the Paley Center in NYC (the first scheduled NYC show since the last one was cancelled). And don't forget that Human Giant has a DVD available and are knee-deep in their second season on MTV. Aziz hung with Clipse during SXSW and in addition to that picture up there, the below video exists to prove it....