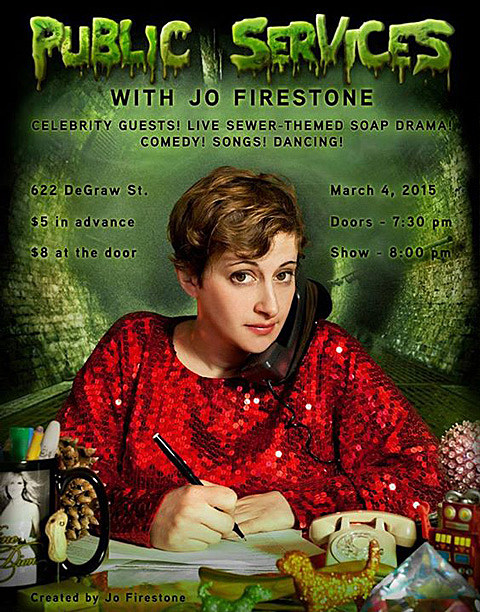 "Public Services with Jo Firestone" happens tonight (3/4) at Littlefield and it's got a pretty amazing group of comedians for the show: Jon Glazer, Chris Gethard, Eugene Mirman, Aprana Nacherla, Andy Blitz, Larry Murphy, Dan Lica and more, plus a live music set from Langhorne Slim. Tickets are $5 in advance and $8 at the door.

Jon Glaser will be back at Littlefield next week (3/11) for the Brooklyn Free Space Fundraiser Spectacular Evening of Entertainment! featuring Janeane Garofalo, H. Jon Benjamin and more -- which is now sold out.

Aparma Nacherla, meanwhile, will be at Union Hall on Friday (3/6) for this month's edition of Dave Hill's "Meet Me in the Bathroom and Tell Me All Your Secrets" that also features Mrs. Smith, Bandits on the Run, and Eliot Glazer (tickets). Then she'll be at the Bell House on March 10 for Jezebel's "March Madness: An Evening of Readings by Women We Love" that also features Ariel Dumas, Jena Friedman, Jean Grae, Phoebe Robinson, Juli Weiner, and Delaney Yeager. That event is free by sending an RSVP email to Madness@Jezebel.com.

Later this spring at The Bell House, on May 7, Greg Proops will be taping an episode of his podcast "Greg Proops is The Smartest Man In The World" and tickets for that are on sale.