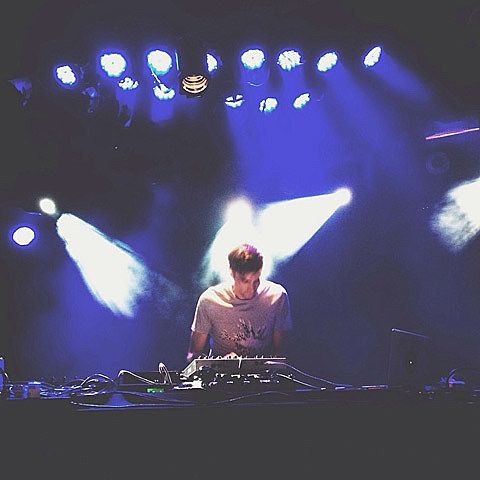 UK electronic maestro Jon Hopkins brought his live show back to New York last night, and his frequent stops on this side of the pond have been paying dividends: the sold-out crowd hung on every wrist flicker, frequently breaking into applause after a particularly ebullient ambient build or riotous bass unveiling. While the deep, evolving tracks from his critically-acclaimed Immunity often blend together into a hypnotic mass of entropy on record, Hopkins' live show this time around was more clipped and chopped, at times blurring into territory that reminded me of a collegiate Skrillex (dare I say it?). Heavy use of a trio of Kaoss Pads allowed Hopkins' physical movements to directly translate into zipping, buzzy bursts of bass. While his set didn't rely on dramatic shifts in tone or texture, Hopkins pulled a lot of gravity from cutting out the low end and letting menacing digital strings hover in the air before sweeping the filter and letting the kick connect. It certainly helped that Hopkins frequently lost himself in the tracks, letting his body pulsate and convulse with conviction.

The evening kicked off with sets from FIXED DJs JDH and Dave P and Providence producer The Range, whose hip hop-inflected tracks were brought to life with the use of turntables and Serato with some creative mixing. His athletic stance as he beatmatched between decks gave off an undeniable confidence, carefully building in energy throughout the set. JDH and Dave P alternated spinning (and also closed out the night) though their sets were functional but mostly faceless techno, holding over the crowd but not necessarily moving bodies. The greatest cheers came when they closed with a Hopkins tune, introducing the man himself as he took the stage.

Jon Hopkins will be in Chicago this weekend for the Pitchfork Music Festival , playing a Sunday afternoon set.