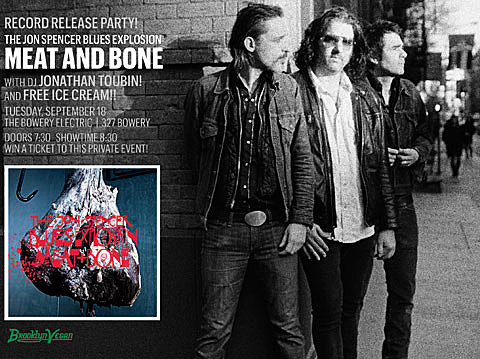 The Jon Spencer Blues Explosion are releasing their new album, Meat and Bone, next week (9/18) and as mentioned, they'll be touring in support of it this fall and hitting NYC on November 3 at Bowery Ballroom with Ava Luna. Tickets for that show are still available.

But if you don't want to wait that long to see Jon and his band in NYC -- not to mention a more intimate location -- you're in luck. We're happy to announce that they'll be playing a surprise BrooklynVegan-sponsored record release party in at The Bowery Electric on the date of the album's release (9/18) with DJ Jonathan Toubin and free ice cream. The only way to get in to the show is to buy the album at Other Music starting Friday (9/14) for guaranteed entry or enter the BrooklynVegan contest to win a spot on the guestlist. Details on how to enter the contest are below.

We posted the Meat and Bone track, "Black Mold" a while back and the JSBX have just revealed another cut from the album, "Bag of Bones." Take a listen to that song, plus check out the contest details and a list of updated dates, below.

======================
For a chance at winning tickets to see Jon Spencer Blues Explosion at The Bowery Electric: either tweet something that includes both @BrooklynVegan AND "JON SPENCER" in the tweet, or send an email to BVCONTESTS@HOTMAIL.COM with the subject line "JON SPENCER". Include your first and last name in the email. We'll pick a winner at random and contact them with more details. If you enter by email, it will not be shared with anyone else. Good luck!
======================