Jon Stewart and WWE's Seth Rollins on 'The Daily Show' 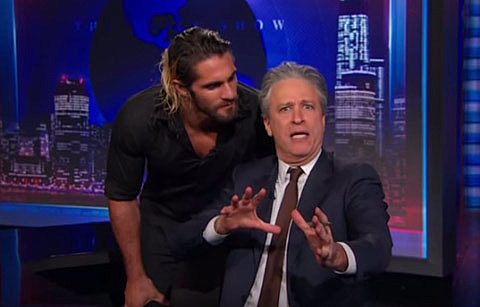 Jon Stewart just retired from hosting The Daily Show and already has a new gig: the celebrity guest host of WWE's annual SummerSlam which happens Sunday (8/23) at Barclays Center (sold out). Some of you may know that Stewart has been somewhat involved in a storyline about WWE's current World Heavyweight Champion, Seth Rollins, and for a little catchup on that you can watch a video below.

Meanwhile, Trevor Noah will take over The Daily Show's anchor chair starting September 28 and you can watch a teaser for that below. In the meantime, Chris Hardwick's comedy game show @Midnight will be on in The Daily Show's usual 11 PM timeslot.

In other Comedy Central news, the very funny faux reality show Another Period, which features a veritable who's who of comedic talent (seriously, pretty much everybody's been on this show), has been unsurprisingly renewed for a second season. If you haven't checked out Another Period yet, the premise is basically a Kardashians style show but set in 1902 when morals, medicine and technology were very different. (The Drunk History folks are involved.) You can check out a few clips below.