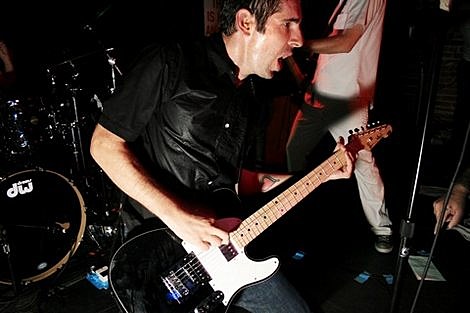 Jonah Matranga of Far, Onelinedrawing, New End Original, Gratitude, and who also has performs under his own name, has yet another project in the works. This one is a collaboration with Ian Love (Rival Schools, Cardia, Burn) and it's called I Is Another. The duo have launched an Indiegogo campaign to raise money for their upcoming EP. They write:

This isn't a project we're planning to put on a label or tour with or anything. It's just friends making stuff and wanting to share it with you. We'll keep in touch as we go, sending each song to you via download as we complete them. A clip from the first one that feels done is up there (thanks so much to Mel Upstart for putting the cool video clip together). Along with the downloads, depending on how much you chip in, you can get limited edition CDs, vinyl and all sorts of other stuff. As of now, we're planning on recording and releasing an EP of 6 tunes. If everyone chips in enough that we hit our goal so we can pay for everything, then for every $1800 that gets chipped in beyond that, we'll record and release another song, straight to you. We'll make as many as you want (seriously). Let's make good stuff happen!

I Is Another have revealed one song from the project so far called "Prayed For You," that sounds like the kind of classic emo you'd expect from Jonah and Ian given their previous projects. You can download that track above, and below there's a trailer video for the EP which features a clip of the same song.

There's no live dates announced for that project but Jonah has some shows of his own coming up, including one in NYC on February 12 at the Gershwin Hotel (7 E 27th St). The show starts at 8 PM and admission is $10.

I Is Another trailer

I Is Another: "Prayed For You" Clip from Mel House on Vimeo.