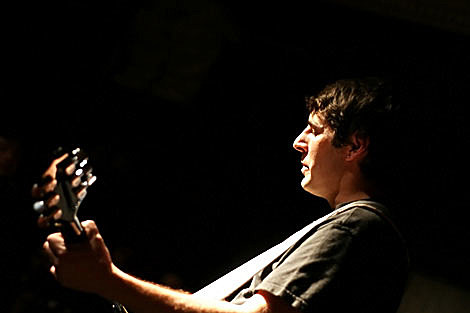 Moral Mazes, the new band of Far's Jonah Matranga and Jawbox's J Robbins, put out their debut 7" earlier this month via Bridge 9 which had all the sounds of '90s post-hardcore that you'd expect from a lineup like that. We already posted one song and you can now stream the full thing below.

We mentioned that Jonah Matranga/Onelinedrawing would be playing a solo show in NYC at Mercury Lounge on November 23, but at the time it was his only announced US date and now it's been revealed that it's part of a full tour and that J. Robbins is opening most dates. Maybe with J and Jonah both there, they'll play some Moral Mazes songs?

The tour also includes another NYC show happening earlier in the month at Saint Vitus on November 12 with Zvi, Mount Gomery and Natural Stranger. J's not on that one, but he is on the Mercury Lounge show which also includes Jamie Stellini. Tickets for Merc and Vitus are on sale now.

All dates are listed, with the Moral Mazes 7" stream, below...