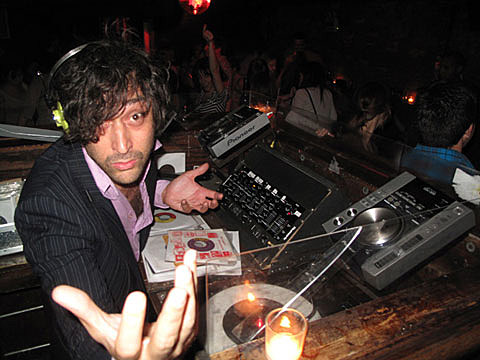 "..The [Portland] room's occupant, Jonathan Toubin -- a DJ from New York in town for a Thursday night show at a Southeast Portland club -- "was literally stuck under the front of the car."

The cab couldn't be backed out of the room because its back wheels were stuck on what was left of Room 115's front wall or window panel.

Palmiter, standing by the driver's side rear quarter panel, and three maintenance men lifted the cab's back tires up and off the front wall.

Within 10 to 20 seconds, they freed the tires and hotel worker Albert Abad was able to inch the cab in reverse, off Toubin.

Toubin was unclothed and semi-conscious, able to move his hands and legs slightly as paramedics rushed to treat him, police said.

Toubin had been pinned between the cab and the room's back wall, said Lt. Rich Tyler, of Station 1. Firefighters placed the man on a backboard. "As he was carried into an ambulance, he was able to talk, but completely covered in blood," Tyler said. " [Oregon Live]

UPDATE: There will be benefits for Jonathan at both Motor City and Home Sweet Home in NYC Friday night (12/9).