JT at Brooklyn Bowl this weekend (photo by Jackie Roman) 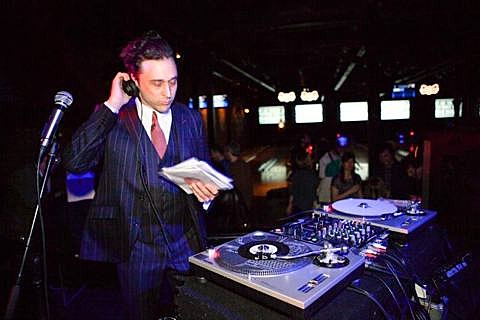 Jonathan Toubin is a busy guy. Last night (4/24) he DJ'd his last ever New York Night Train at Ludlow St. bar Motor City (whose days are numbered). This weekend he'll launch a new party at Glasslands before heading out to Europe. Here's the skinny:

It has been nearly a year since DJ Jonathan Toubin returned to New York following a five-and-a-half-month recovery from the injuries he sustained after a cab drove into his Portland, Oregon hotel room. In April of last year, he was able to return to a restricted schedule of Fridays at Home Sweet Home, and soon after, he began performing his signature Soul Clap & Dance-Off on Saturday nights, monthly at Brooklyn Bowl and at one-off gigs on the road. (The most recent of these Soul Claps happened Saturday, April 20 at Brooklyn Bowl). His health is now enough-improved for him to go on his first extensive tour since the accident and return to his old practice of adding unique new parties to his schedule. On April 28, Toubin will host his Animal Print Party at Glasslands (289 Kent Avenue, Brooklyn), before embarking on a European tour in May. The event is free if you're wearing animal print, $5 without. (More info here.)

The Animal Print Party, a concept Toubin has been developing for years, will be a night of getting down to exotic rock and roll from the late 1950s and early 1960s. The dancers become the décor: Patrons are encouraged to unleash their inner-beasts on the dance floor while donning their favorite animal print attire - cheetah, zebra, leopard, tiger, etc. Toubin will play a mix of beat-heavy rock n' roll novelties chock full of jungle drums, Latin beats, Middle-Eastern scales, outer space sounds and other bizarre danceable music from the far ends of the exotic imagination. A week in advance of the party, Toubin will release a mix of selections that capture the essence of the evening. Also expect a smattering of animal dance craze numbers (gorilla, monkey, alligator, camel walk, etc). For anyone in search of the "Old Weird America," this is intended to be as weird and wild as it gets. Toubin will be accompanied by go-go dancer/performance artist/animal print bikini collector Anna Copa Cabanna and guest DJs/performers.

In May, Toubin will embark upon a month-long international tour that will take him from the Yeah Yeah Yeah's-curated All Tomorrow's Parties in London to a variety of DJ gigs and Soul Claps in the bars, boats, beaches, discos, music festivals, and rock clubs of Europe.

To get a better idea of what Jonathan's Animal Print party will be like, he made a mix that you can stream below. Before that, he'll be at Home Sweet Home on Friday night (4/26) for his "Shakin' All Over Sideways and Down" party, and then he'll be in SUNY Purchase on Saturday (4/26)  for Soul Clap & Dance-Off. All dates are listed below... 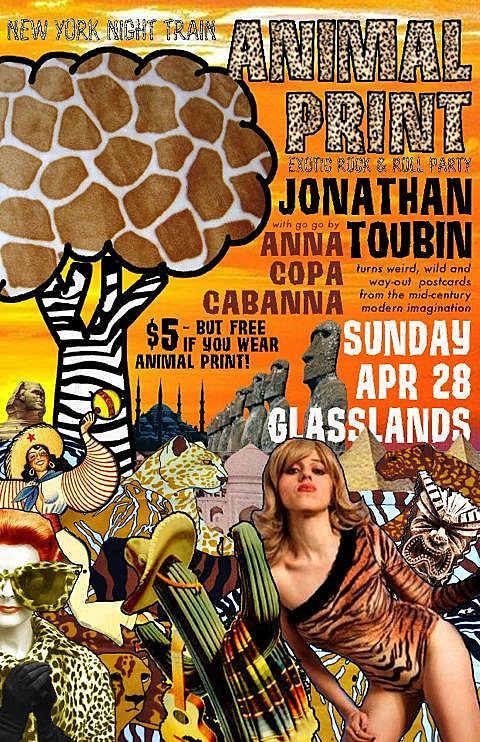