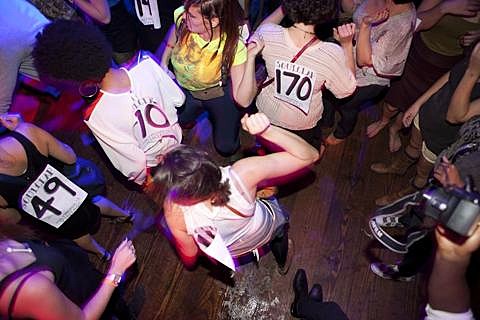 The Soul Clap & Dance-Off parties/competitions are going on the road with DJ Jonathan Toubin via the Brooklyn Brewery Mash Tour traveling arts festival. Taking place over the course of 2013, winners of each cities' Dance-Off get $100 plus they'll be flown to NYC to compete in the national championship which happens January, 18 2014 at Brooklyn Bowl. The NYC branch of the competition takes place on March 23, 2013 at Brooklyn Bowl and, since there's no travel part to the prize, the local winner gets $500.

In other Jonathan Toubin news, he's spinning punk rock at Motor City on Ludlow St. all night tonight (2/28) as part of the afterparty for Vietnam's show at Mercury Lounge.

Then next month, Toubin is going to do something he almost never does. Play the hits:

YOU PROBABLY HAVE NEVER HEARD YOUR FAVORITE RECORDS! For real! Teams of specialists recorded, mastered, and pressed songs to sound amazing with painstaking deliberateness. Over the years these original 45s have been remastered for CD, mp3, and even record - losing their rich dynamic qualities and becoming another animal entirely - sounding nothing like what the artists', producers', and engineers' original intentions. But tonight you have an opportunity to dance to your favorite tracks in their purest state - the original mix undigitized and uncompressed. This is not audiophile mumbo jumbo - you are not likely to recover from hearing your favorite songs on the ultimate sonic medium through Bowery Ballroom's first-class sound system. And like good wine, you won't go back to the bad stuff once you've had a taste. - Jonathan Toubin

Jonathan Toubin, acknowledged crate-digger and champion of obscure soul 45s, will be playing the hits at Bowery Ballroom on March 28. Tickets for this rare chance to hear him play songs most people know go on sale Friday (3/1) at noon.

Jonathan will also be all over Austin for SXSW. His SXSW schedule and all Soul Clap & Dance-Off tour dates are listed below...