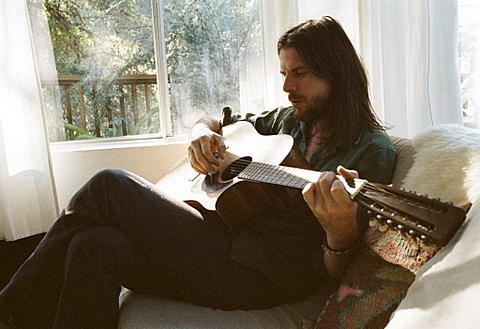 To say that the second album by North Carolina native Jonathan Wilson feels a bit like getting a free reflexology treatment and a small dose of diazepam combined is, accordingly, no criticism. This immersive double-length album is so languid that it might have its own gravitational field, pulling you earthwards to examine the sky in some detail, growing your hair out with every slowly unfurling guitar line. Even if you care nothing for the culture of Laurel Canyon, the Los Angeles crucible of stoned country-rock back in the 70s and Wilson's recent stomping ground, his unhurried, backward-glancing Gentle Spirit might speak to you, in a whisper laden with effects...

...Wilson's prescription for our ills is simple: flutes, pianos, organs, guitars (acoustic and electric, and lots of them) and guests (even more of them). This album grew - very slowly - out of regular Wednesday night jam sessions that Wilson hosted at his old Laurel Canyon base...Jonathan Wilson is a producer, guitar-maker and veteran of Robbie Robertson's, Jackson Browne's and Elvis Costello's bands. Wilson's fellow Canyon noodlers included Chris Robinson of the Black Crowes (who doesn't appear on the album), plus a Jayhawk, bits of the Steve Miller Band and Andy Cabic of Vetiver, another bunch of psychedelically leaning longhairs, all of whom do. [The Observer]

Jonathan Wilson's Gentle Spirit made its way onto many Best of 2011 lists, coming in at #4 on MOJO's year end coverage (check out the full list below). Mind you, Wilson's music -- which recalls the heyday of early '70s Laurel Canyon -- is prime fodder for a magazine that has a Beatle on the cover at least once a year, but Gentle Spirit is a genuinely gorgeous album that exudes a West Coast vibe even in the coldest New York winter. Spotify users can listen to the album here.

Jonathan Wilson hits the East Coast next week, which will include three stops in NYC: he plays two nights at  Mercury Lounge (an early show on January 19 and a late show on January 20 with Quilt) and then hits the Rock Shop on January 21. He also plays Philadelphia's World Cafe Live on January 18. Click through for those dates in list form (as well as European dates), plus a few music videos and MOJO's full 2011 list...

Jonathan Wilson - Canyon in the Rain