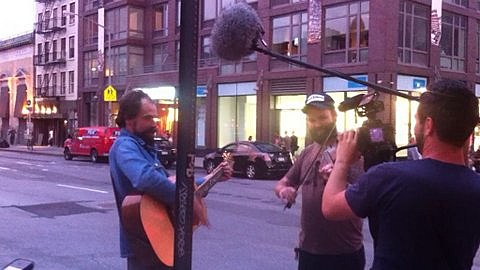 "Y'all can still call me whatever the hell you want. I just cannot get the words to come out of my mouth anymore. We are now Jonny Fritz and The In-Laws" -- Jonny Fritz.

Johnny Corndawg played his final show under that name on Wednesday (8/1) at Mercury Lounge. On stage that night he announced he was ditching the Corndawg moniker and would henceforth go by his given last name of Fritz. He also told the crowd that he has a new album in the can with a release date TBA.

You can catch Jonny Fritz and The In-Laws' first-ever show at Union Pool tonight (8/3) with The Extraordinaires. Advance tickets are no longer on sale but there may still be tickets available at the door. Jonny, who also recently played the Newport Folk Festival (video below), just added a bunch more tour dates, including a few with Lucero, which are listed below.