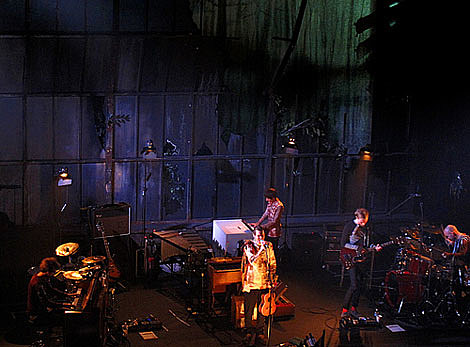 On a set that looked like the Museum of Natural History after a fire (trust me), a tight musical arc that fit the songs into one another like puzzle pieces, and gorgeous projections courtesy of London's 59 Productions, the show was less winsome rock and more serious Theatre. There were costumes, too: All but one band member wore a jacket trailing bright fabric strips that hung like rainbow tree moss.

But when the whole band combined like a marvelous machine, as on the twinkling "Sinking Friendships" or thrashing, thunderous closer "Grow Till Tall," the Jonsi experience reaches its height. Percussionist Samuli Kosminen manages to alternatively scare and soothe with tools both expected (good old drums) and unusual (a rock, I think).

In between, "Tornado" hinted at both orchestra and film score, "Go Do" found a sunny, breakneck pop sprint, and "Around Us" was a hypnotic, trippy epic, complete with live vocal loops.

The pinnacle, however, came in the encore. Jonsi, in full Native American headdress, emerged from the side of the stage and put his plumage on full display. Then he smiled, and it was clear: Sigur Ros is a beautiful thing, but when he goes solo, Jonsi does something amazing -- he lets his freak flag fly. "I want to be a miracle," he sang on "Boy Lilikoi." [Spin]

Jonsi's world tour in support of his solo debut, Go, kicked off last night (Tuesday, April 6th) in Vancouver. The pictures, video (below) and review above are first looks at the sprawling stage show set up for the tour...

[Jonsi] enlisted a design company that creates sets for the Metropolitan Opera Company, the English National Opera and other bastions of high culture. The company, Fifty Nine Productions, was looking to branch out into pop music. "We were all really big Sigur Rós fans. They were literally on the list of people we wanted to work with," says director Mark Grimmer.

For Jónsi, Fifty Nine Productions created a sort of decimated museum exhibit on stage, with heavy use of video projections--without jumbo-sized screens. "We try to integrate the images into the fabric of the shows and project them onto objects that aren't dead when there's nothing on it," Mr. Grimmer says. For instance, video is projected in museum-like exhibit cases along with on Jónsi himself. [Wall Street Journal]

Jonsi and band play Vancouver again tonight (4/7). Their tour goes on to include Coachella and two nights at Terminal 5 on May 8th and 9th. Tickets are still on sale for those.

If you need a Jonsi fix sooner, there's a free listening party tonight at Le Poisson Rouge (no RSVP required) for the new album, which came out today (4/7)...

"Album available to purchase on site, and happy hour drink specials for the duration of the event. The album will be played in full, with giveaways set up for Jonsi/Sigur Ros vinyl, and tickets for Jonsi's Terminal 5 shows on May 8th and 9th. Video footage from Jonsi's new music videos and related projects to be screened as well."

A couple more pictures and videos from the Canada show, the set list and more are below... 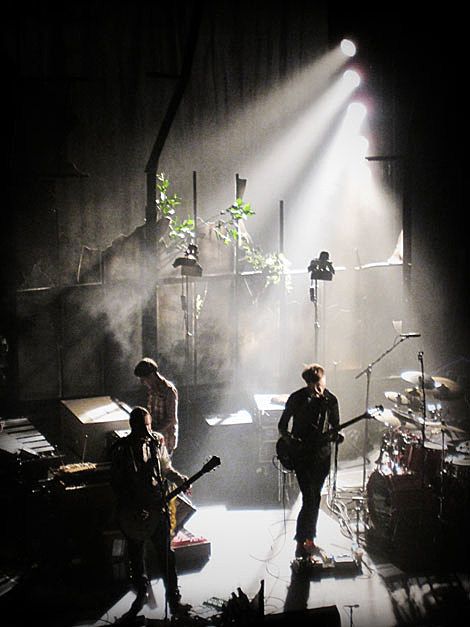 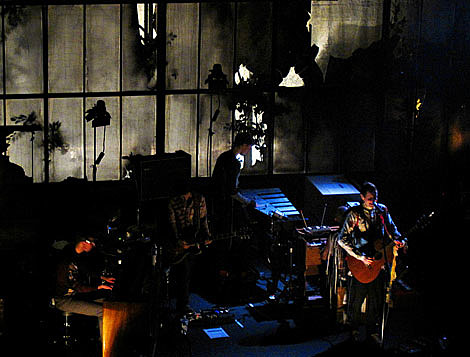 Jónsi - album interview and making of