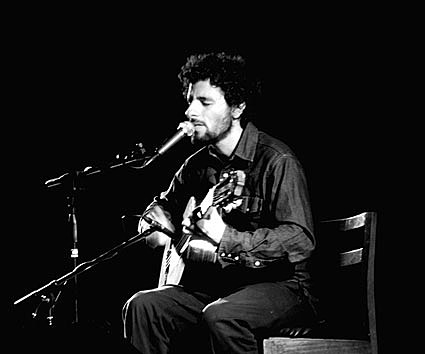 As you might remember, Jose G is paying New York a visit in August to play the Spiegeltent. Then one month later he comes back to start a tour that includes two shows at the Gramercy Theatre, and one at the new Music Hall of Williamsburg aka where Northsix used to be.

Beginning with a special preview show at the Spiegeltent in New York City's South Street Seaport on August 21st, González will kick off the first of two upcoming US solo tours on September 27th with three consecutive New York City appearances during the week of album release. On this upcoming tour González will be performing songs from his forthcoming record In Our Nature including the album's first single "Down The Line" which is set for a August 14, 2007 digital release in North America. Savath and Savalas and James Blackshaw will open for González on select dates.

Performing seven times at SXSW in March 2006, González went on to sell out solo shows in virtually every major US market last year, in addition to performing at festivals such as Central Park Summerstage, Austin City Limits, Hollywood Bowl, Bumbershoot, the Intonation Music Festival, V Fest and most recently at the Coachella Music Festival in April 2007.

After concluding the first US tour in Minneapolis on October 13th, 2007, González will tour the UK and Europe. He will return to the US for a second tour beginning November 2007 (dates TBA).

In Our Nature sees González coming into his own as a songwriter – displaying a heightened emphasis on melody and strong, focused lyrics with songs that are as instantly accessible as they are brimming with darkness and brooding intensity. It is the follow up to González' debut album Veneer (reissued on Mute April 2006) which went platinum in the UK and Ireland and sold more than 700,000 worldwide.