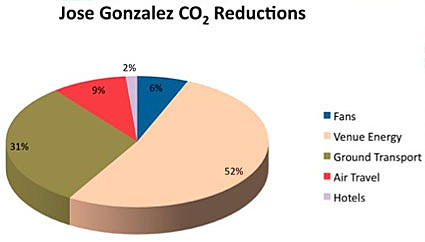 I'm not sure exactly what the pie chart means, but I think as fans we could maybe be doing a better job if we ever want to catch up to Grand Transport. More stuff and tour dates below.....

Having completed a highly successful 30 date Green tour of North America with Reverb Rock (reverbrock.org) - which helped to reduce the carbon footprint of the tour by 76 tons of CO2 - José González is set to release the In Our Nature Remixes EP (Digital Only) on Earth Day, April 22nd via Mute Records. The EP features tracks from the In Our Nature LP, remixed by the likes of Todd Terje, Penchenga Nord, Beatfanatic, and Landberg & Skogehall.

He follows that with the digital single for "Teardrop", to be released May 6th by Mute. The single will include the b-side "Four Forks Ache". ("Teardrop" is originally performed/recorded by Massive Attack)

On June 13th José will kick off a string of North American tour dates with an appearance at the 2008 Bonnaroo Music and Arts festival in Manchester, TN