Mute Records is proud to announce Jose Gonzalez' Green Tour of North America in the spring....in partnership with Reverb, a non-profit organization designed to educate and engage music fansand promote environmental sustainability. They work closely with artists to create earth-friendly events and tours. As part of the greening of Gonzalez' upcoming tour, his rider will include biodegradable catering products, and a reduction of plastic water bottles will be facilitated by providing his crew with re-usable water bottles to carry throughout the tour. In addition, Gonzalez and Reverb will calculate the CO2 footprint of the tour and neutralize emissions from venue energy use, ground transportation, flights and hotel accommodations by supporting clean renewable energy projects. 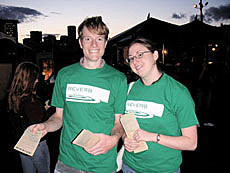 There will be a 50 cent add on to general ticket purchases that will support Reverb's greening efforts. Pre-sale ticket purchasers via Ticketstoday.com will also have the option to add an additional 50 cents to Native Energy's CO2 Offset program. At the shows, fans will have the opportunity to purchase a custom Jose Gonzalez sticker, the money from which will be used to purchase carbon offsets generated fromtravel to/from the show.

I don't totally understand what they just said, but it sounds nice. Awareness is good, and it's probably better than NOT doing all that (whatever it is they're doing).

As part of the green tour, Jose is playing NYC twice: Highline Ballroom on March 11th, and Brooklyn Masonic Temple the next day. AND, he is also playing a shorter set @ Terminal 5 on March 6th as part of the Plug Awards (DID YOU VOTE YET?). All tour dates below....