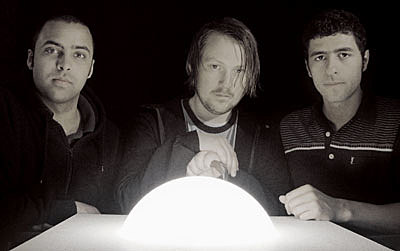 Jose Gonzalez has a band called Junip. They have an album called 'Black Refuge.'

"Whereas Gonzalez's solo debut 'Veneer' was a wistful collection of musical gems that eschewed the oft histrionic excesses of romanticism in favour of sleight musical (yet fathom deep emotional) dissertations, 'Black Refuge' sees him embark on a markedly more expansive sound alongside Elias Araya and Tobias Winkerton. Opening through the title track, Junip combine a bluster of organ thrums, thickly rendered percussion and Gonzalez's beautifully placid vocals to produce a sound which is at once spiralling yet very much rooted in the emotional bedrock." [Boomkat - where you can buy the CD]