Still from "Where is My Van?" video 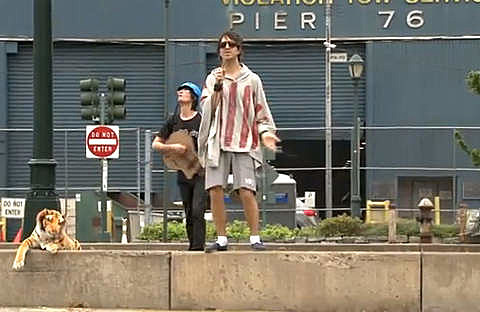 So after all this I got my van back!
I can't thank y'all enough for your support and help.
It cost plenty, but I'm very happy to have my art and my gear back.
Jose (the guy who had it) drove a hard bargain (Ron calls it a sort of hold up)
and sold it all back to me for $5,500 after he paid a grand for it,
but I'm trying to keep it in perspective,
Things like this can't be measured strictly with numbers
and the life lessons it taught were of greater value than the dollars and cents.
The main one being the support I got from all of you.
Along with the people,whom without I never would have gotten it back,
Ron, Vic, Lea, Carla, Julie, Peter, Kraig, Ehud and Spencer - THANK YOU!
The list goes on, but now I need to search this four wheel goliath for my tarot cards and try to catch new dreams.
Thanks again everyone and I hope to see you down the road.
I'll be the one driving a van more famous than me.

We're glad this all worked out for Joseph Arthur who got his van back (which had been towed and sold by the City of New York) thanks in part to civil rights lawyer Ron Kuby. In hopes of recovering some of the costs to get his van and his contents back from the person who bought it (for a grand), Joseph is performing a fundraiser show at City Winery on October 21 which is apparently already sold out (at least that's what the website says), but if you'd like to contribute to the fund, you can purchase a "Where Is My Van?" t-shirt from Joseph's webiste. You can also catch Joseph at ATP NY this month, and at the other dates which are listed below.

As you may have heard, Joseph wrote a song, "Where is My Van?," that you can download above. He also made a video for the song, featuring Peter Buck of R.E.M., that Michael Stipe has called "The best music video since Sinead O'Connor's 'Nothing Compares 2 U.'" You can watch it below. We can only hope Joseph will write a follow-up single, "My Van Was in the Bronx."

Speaking of Michael Stipe, earlier today he expressed his dissatisfaction with Fox News.

Van video is below