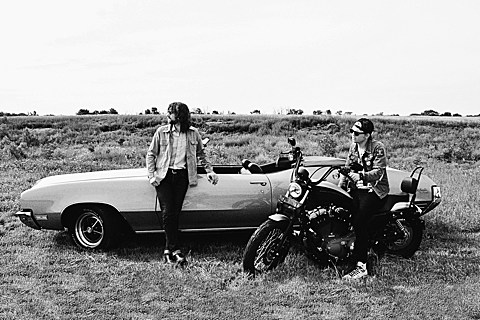 Early '00s-era band The Anniversary officially called it quits in 2004, after releasing two full lengths -- 2000's emo classic Designing A Nervous Breakdown and 2002's more indie rock-leaning Your Majesty -- and a number of EPs/splits. The band's frontman, Josh Berwanger, went on to front alt-country band The Only Children for a while, and now he's returning to the public eye with his first-ever solo album, Strange Stains, due out October 1 via Good Land Records. The album's first single, "Baby Loses Her Mind," sees Josh diving into Petty-esque heartland rock/power pop territory, and that can be downloaded above or streamed below. It also features drums by Jim Macpherson of The Breeders and Guided by Voices.

Josh will also be touring in support of the album this year, and he comes to NYC for a CMJ show on October 19 at Mercury Lounge. Other acts TBA.

All currently known dates are listed, along with the song stream, below...

Filed Under: Andrew Sacher, Josh Berwanger, The Anniversary, The Only Children
Categories: Music News, tour dates
Comments
Leave A Comment
Back To Top