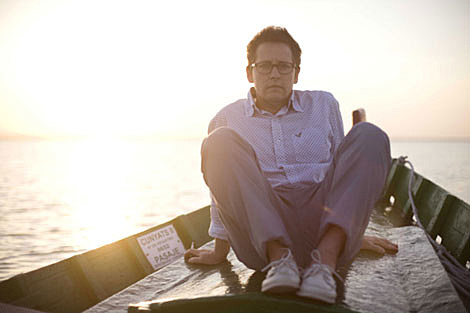 "I know it's kind of funny, this Midwestern guy doing Brazilian songs in Spanish," says Josh Rouse about his new studio album, El Turista. "I don't know if it fits, but I like the way it feels." [Yep Roc bio]

Josh Rouse will be putting out his new record, El Turista, on March 9th through Yep Roc. He makes a US trip this February. That includes a pair of shows at NYC's (Le) Poisson Rouge on February 4th and 5th. Christina Courtin (as per her Myspace "I'm not a fucking jazz singer") opens. Tickets to the February 4th and February 5th shows are on sale.

Before then, Christina Courtin plays Rubin Museum of Art on Friday, January 29th (tonight) as part of their Naked Soul series. Tickets are on sale.

Josh Rouse is not to be confused with Josh Ritter who was recently seen opening for The Swell Season and playing with Dawn Landes at Mercury Lounge, and who will be back soon to play Town Hall (It will be even more confusing when Josh Rouse's upcoming show at the same venue gets announced).

Josh Rouse was filmed by La Blogotheque last July in Barcelona, where he now lives. Those Blogoteque videos, a download-for-your-email widget (for a song off his new record) and all tour dates are below...

Josh Rouse - Oh, look what the sun did / Duerde Mobila - A Take Away Show

Josh Rouse - I Will live on Islands... - A Take Away Show