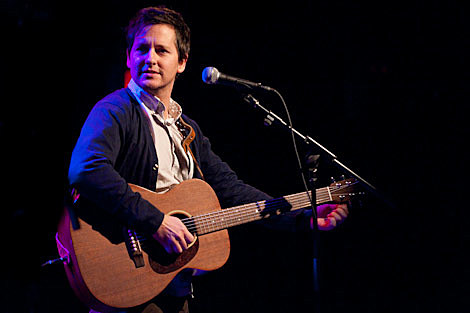 "For the last few years, I've been listening to a lot of Brazilian music," [Josh Rouse] says. "Especially, João Gilberto. As well as jazz artists like Vince Guaraldi and Terry Callier. I started to get rhythmic ideas from their stuff--then, conceptual ones. I knew I wanted to sing some of my new songs in Spanish, set against a backdrop of Latin grooves. The record has some things I wrote like 'Don't Act Tough,' and folk standards like 'Cotton Eye Joe.' Somehow, these things fit together for me." [American Songwriter]

Josh Rouse will be back in NYC on Wednesday, April 28th for a show at the Bell House, as part of a string of April US dates. Tickets for the Brooklyn show are on sale.

His new record, El Turista, came out March 9th on Yep Roc and he played two nights at LPR in February.

All tour dates and videos of Josh Rouse playing around Paris filmed by a Blogotheque-esque site called Le Hiboo are below...