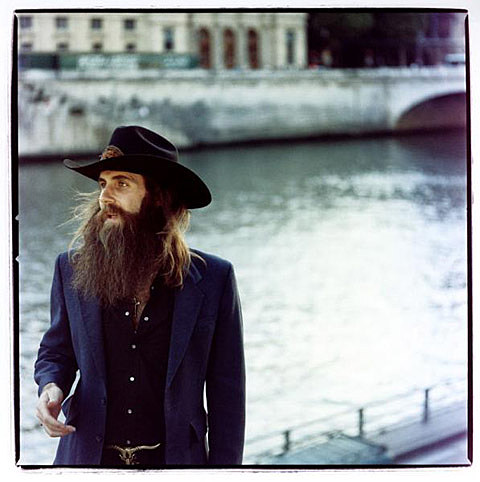 "The hubbub from upstairs regularly intrudes through swinging doors on an intimacy that requires leaning in, to hear Pearson's murmurs. Lift to Experience's thunder has been replaced by a man who stares straight ahead, fingers strumming his acoustic guitar in slow motion, his thumb barely grazing a string. Though his short set includes fearsome country songs about the infidelity and break-up torturing him on his new record, he doesn't let their oppressive mood capture us. Even "Country Dumb", epic pop of sorts, becomes a whispered sketch, as if all the worrying and honing has left skeletons and traces of songs." -[The Independent]

The above review comes from a recent Josh T Pearson show in London. The former Lift To Experience frontman and former Texan who now lives in Paris, is currently hanging out in NYC, at least for another day or two. You might have caught him opening for Esben & the Witch at the Bell House over the weekend. It was his U.S. solo debut. If not, there's a second NYC-chance at Trash Bar in Brooklyn TONIGHT (3/9).

"I first heard of Josh when I listened to the Lift To Experience album The Texas-Jerusalem Crossroads. It was around the time I started recording the first Bat For Lashes album, and I remember being so taken aback by Josh's haunting voice, preacher-like storytelling lyrics and guitar playing... Like a doomed angel singing over a desert storm." -Bat For Lashes

Josh's next shows after tonight are in Texas during SXSW. The heartfelt and haunting singer-songwriter whose new album I've had on repeat (Last of the Country Gentlemen will be released by Mute on March 29) plays four shows down there including a noon set at Swan Dive on Thursday, March 17th aka at the BrooklynVegan day party happening there that day (more details soon!). He also plays a show at Central Presbyterian Church. All Austin dates, and a whole bunch of European ones, are below.

Download "Woman, When I've Raised Hell" above. Listen to "Sweetheart I Ain't Your Christ (piano version with Dustin O'Halloran)" and other songs with all dates, below...