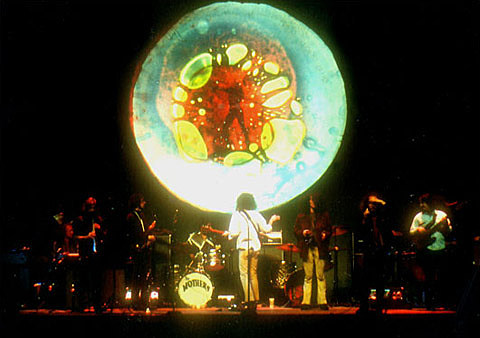 The Joshua Light Show is back in town this weekend, doing their old-school psychedelic visuals -- which provided hallucinatory effects for The Who, Jimi Hendrix, The Grateful Dead and others -- for the first time in a 360-degree environment: the Hayden Planetarium at the American Museum of Natural History. The three-night performance, titled Fulldome, happens Friday - Sunday (June 3 -5) and tickets are still available.

Fulldome explores the concept of synesthesia, the blending of sensory experiences. (Or as a hippie might say "I can see the music, man!"). For a more scientific explanation of this, you can attend Brain: The Inside Story which precedes the Joshua Light Show performances.

While lacking the live bands the Joshua Light Show usually performs with (like Oneida, Woods, and Dean Wareham last year) the planetarium envoirnment will no doubt be a much more immersive experience. You can watch a short feature/EPK on Fulldome below.

Speaking of the AMNH, the next edition of "One Step Beyond", their monthly dance party in the museum, takes place on June 24th though no lineup has been announced yet. Dan Deacon played the last one.

For a cheaper museum experience (and speaking of Oneida), members of the Yeah Yeah Yeahs and Oneida play with silent films at the Met this Friday. Free with museum admission. Glen Hansard recently played there.

Blitz the Ambassador and DJ Spinna appear at the Brooklyn Museum on Saturday. Free.

New York's "Biggest Block Party", the annual Museum Mile Festival happens June 14th from 6pm - 9pm. "One day a year, for the past 32 years, nine of the country's finest museums, all ones that call Fifth Avenue home, collectively open their doors from 6pm - 9pm for free to New Yorkers and visitors for a mile-long block party and visual art celebration. This traffic-free, music- and art-filled celebration fills the street and sidewalks of Fifth Avenue from 82nd to 105th street, the mile now officially designated as Museum Mile. Over 50,000 visitors attend the festival annually."