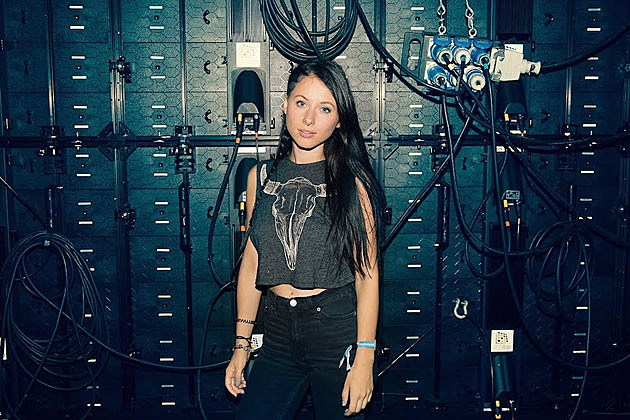 "The EDM phenomenon-- not the genre, but rather the mass events born of it-- is the sad expression of a generation for whom music is no longer culture or art, but just another consumer good. EDM is nothing more than spectacle: boom, boom, and pyrotechnics. It is the funfair version of electronic dance music." [Nadja Brenneisen]

In an effort to prove this theory and show people just how phony the world of EDM DJs can be, Nadja Brenneisen set out to become one. She called it an art project and it it was a successful one. She did have a slight unfair advantage: her friend Tobias was a DJ booker, was in on the joke, and give her her first gig. Regardless, they were easily able to show how little "art" actually goes into being an EDM "artist".

Here's another passage from the article:

The first gig was a full success for our project, which Tobias and I had been calling our "art project" for a while. We picked the tracks by going through the most successful sets from the last Tomorrowland festival and picking the best and easiest hits. The audience loved our tracks, purely because they knew them already. Because they were predictable. It also helped that that the local DJ scene tore it apart. There was bitching galore, and suddenly the scene was interested in us. We were two newcomers who had appeared from nowhere, playing EDM, and, to the utter horror of the established DJs, were adored by our audience. Those in the know rightly wondered why we were suddenly being booked and questioned our "realness." In July 2014 we played three shows together, including the festival Touch the Air. Each time, the audience got our copied Tomorrowland set and it reliably made them happy.

From there she got bigger and bigger and even started working with a ghost producer to create her own tracks (though none were released). She was demanding big fees and even playing festivals, but then she graduated school, was offered a full time journalism job and left the "project" all behind along with an article about it all at VICE's Thump site. Check out here full story over there.

Meanwhile, phony EDM DJs is kind of a theme on BrooklynVegan today. If you haven't read our interview with the great John Lydon of Public Image Ltd aka Johnny Rotten of the Sex Pistols, definitely check it out. Here's one related, great thing John said:

Well, it's so easy to deceive the masses, isn't it? All one's gotta do is wave a shiny bauble, and I suppose like ravens, they just go for the shininess. They don't realize that live music or the people that made the music that the DJs are playing are surely more relevant. It's quite bizarre to me and laughable, too. One of the earliest things I remember doing was I was a DJ myself, and I'd play a vast amount of music, but I wouldn't try to keep it secret or pretend it was all about me. I was just really proud to say, "Listen to this record I get to share with you," and I don't think that's the business of this now. It's where the DJ is the celebrity, and everything else is secondary. It's quite hilarious to see in these venues now. A bloke on top of a pyramid with fireworks and all's he's doing is putting on a CD and waving his hand, and there's 20,000 people all gleamed and glued into this absurdity that has absolutely nothing to do with entertainment or music or having a brain and enjoying yourself. It seems like brainwashing, actually.

It does, it does. Read more with John HERE.