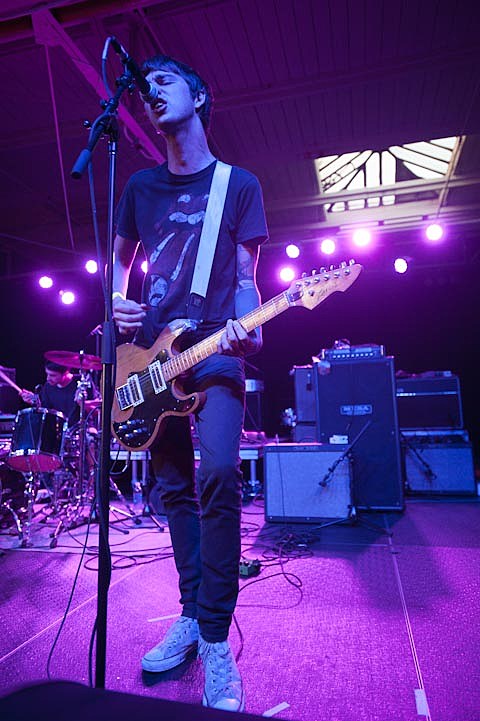 Cali punks Joyce Manor made their way to NYC last night (8/16) for a free House of Vans show with Cursive, Titus Andronicus, and Love As Laughter. Pictures from their House of Vans set are this post. After their set, they headed over to the much smaller Brooklyn venue, Acheron, for a late show there. The line was already down the block almost an hour before doors opened and by 11 PM, opener Crushed took the stage, followed by Joyce Manor's Cap'n Jazzy tourmates Algernon Cadwallader, and finally around 12:30 AM, Joyce Manor walked out.

Due to the massive amount of kids ambushing the stage and running up onto it to stage dive, frontman Barry Johnson's mic was knocked over countless times, but with all the shouting along from the crowd, it didn't make a difference. For show standout, "Constant Headache," Barry was crowded with fans putting their arms around him and screaming along. When he wasn't bothering with the mic, he was leaning over the crowd with his low-hung guitar and singing with them, as the rest of the band rocked out as much as possible on Acheron's small crowded stage. It was a super fun, sweaty show and the band is far from a bore to watch. Like Titus Andronicus' Patrick Stickles, who they shared a bill with earlier that night, Barry is an overly confessional, descriptive, and slightly self-loathing frontman, and a bit of a show-stealer. But the rest of the band is relentless too, thrashing around on stage like the equally catchy and abrasive Cloud Nothings and Japandroids.

The set included a number of other highlights from their 2011 self titled LP, including "Call Out (Laundry)," "Constant Nothing," "Leather Jacket," and others, but unfortunately "Violent Inside," the single off of 2012's Of All Things I Will Soon Grow Tired was the only track played off of that album. The punkier s/t LP is great and I can totally see why its material might be more fun to play live, but in addition to Tired's fast cuts like "If I Needed You There" and "Comfortable Clothes," working in the diversity of that album against their first would've better represented who the band is and the boundaries they so effortlessly cross. Hopefully next time around we'll get to hear more of that one -- tracks like "These Kind of Ice Skates" or "Bride of Usher" are some of Joyce Manor's best to date.

More pics from House of Vans and a video of Joyce Manor playing "Five Beer Plan" at their CT show earlier this week below... 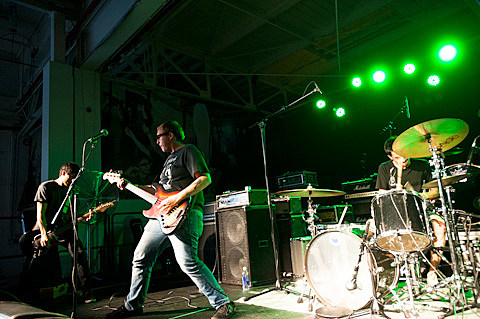 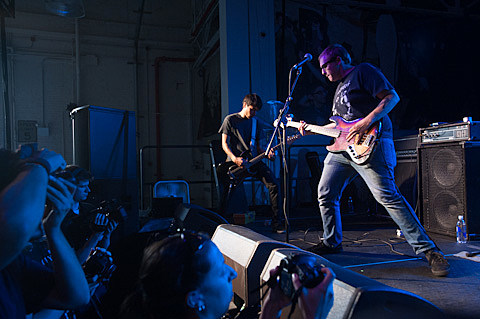 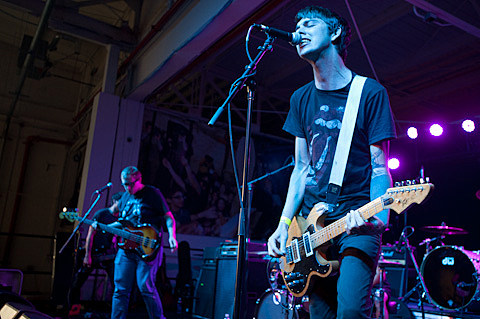 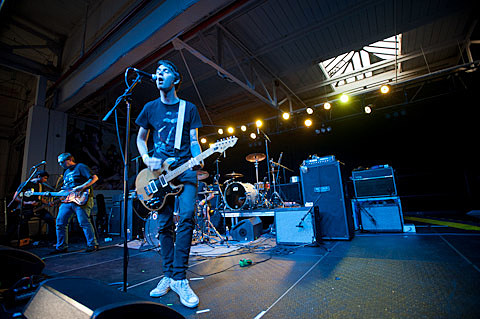 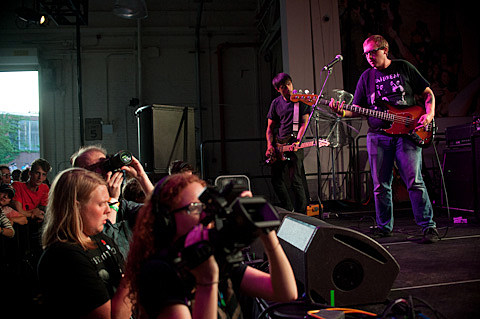 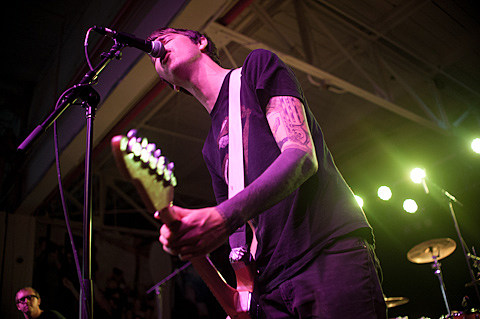 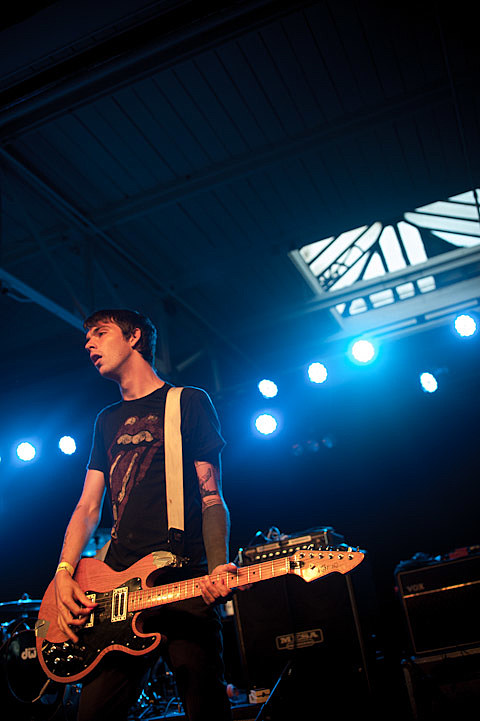 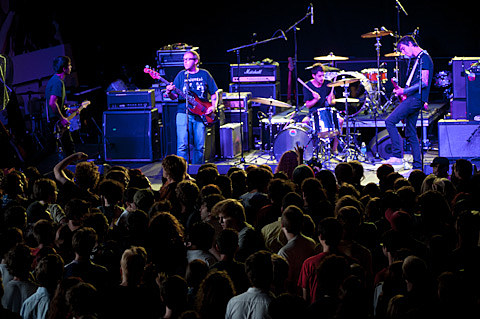 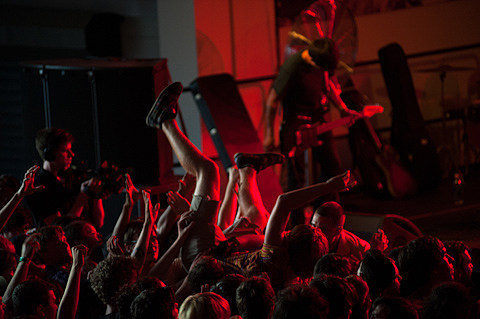 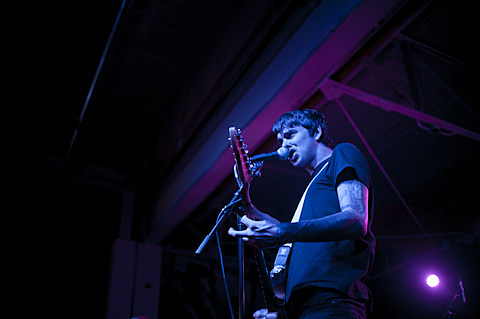 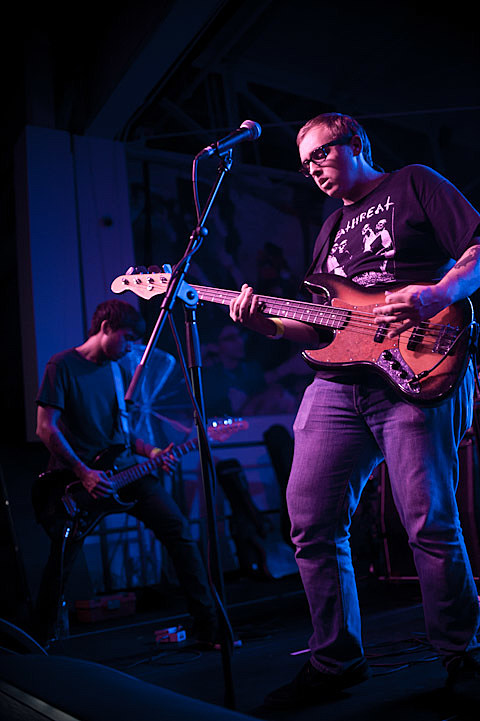