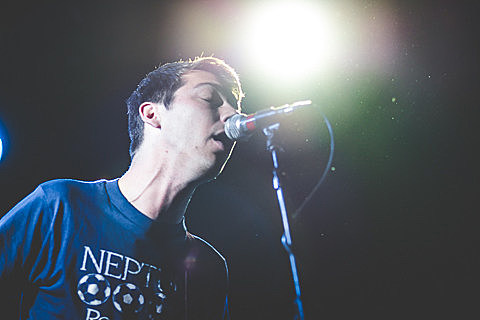 Certain corners of the internet punk community have been up in arms this week after Joyce Manor "shamed" a stage diver at their Jacksonville, FL show this past Sunday (9/21). Themusic.com.au described the incident, writing:

The "grown man" in question -- got up on stage during one of Joyce Manor's songs and proceeded to stage-dive onto a group of young fans, overwhelmingly described since as being no older than high-school-age. Johnson, noticing the commotion, abruptly stopped the song and pulled the diver up on stage.

"Hey man, how tall are you?" Johnson asked the stage-diver. "How much do you weigh, if you don't mind me asking?"

Upon being told he weighs about 190 pounds (86 kilograms), Johnson turns to a girl in the audience: "How much do you weigh? Sorry, that's really rude. You're much smaller than him, right? It's completely unacceptable for him to impose himself on top of you. Completely unacceptable, right? Under no circumstances is that acceptable? OK."

They've also got a video of the whole thing going down which you can watch (starting at the 1:00 mark) below.

That happened only six days after we mentioned they singled someone out at their New York show for a similar thing. The NY Times has more on what he said at that one:

[Barry] Johnson, though, sensed something sinister happening. He asked: "Ever been watching a sensitive pop-punk band," and "get your head walked on?"

...He noticed a few bad actors. He recognized the type, he said: "hardcore guys with Morrissey haircuts" who think nothing of "using a teenage girl's face for leverage" to climb on top of the crowd. "I'm not about that," he added. Indeed, at least two young women retreated from the center of the crowd clutching body parts in pain, though they both merrily returned.

Midshow, one of the Morrissey-haircut guys climbed onstage for the second time, and Mr. Johnson motioned to a security guard at the side, who chased him down and forcibly removed him.

At Bowery Ballroom, he was met with cheers, but of course this is the type of thing that gets a lot of other people angry. Stuffyouwillhate.com called them "old men who don't understand the lifestyles of the youth." Idioteq.com wrote of the video of the Jacksonville incident, "No stage diving at punk rock shows?! Haha, you simply have to watch this video. Barry Johnson really embarassed himself with this cheesy move." Some people tweeted things like, "Seriously that infuriates me so fucking much Joyce Manor are a bunch of fucking pussies. Don't support them," or like, "Just saw a video of a kid getting thrown out cause he stage dived to Joyce manor. Fuck that band. Your supposed to encourage dives pussies," or like, "Lmao fuck Joyce manor, calling out a guy for stage diving." The Runout points to a screenshot of pop punk band American Verse posting, "Fuck these pussies. Stage dives forever."

Seeing a lot of people online saying I'm a "pussy" and a "bitch" for calling out that grown man trying to crush a group of teenage girls. So far on this tour I've seen a girl with a black eye, a girl with a concussion, and a girl with a dislocated knee. Great way to make young women feel safe at a show when the rest of the fucking world is hostile towards them already. I love a crazy show as much as any1 else I just don't think any1 should have to go 2 the hospital cuz of sum idiot w a tank top & Moz hair.

Barry also added later on, "Not sayin every1 who stage dives is an asshole. Ppl been gettin hurt & maybe we should cool it? Myself included," along with a picture of himself stage diving with his guitar. Other bands took to Twitter to voice their support for them, including Balance & Composure, Candy Hearts, The Sidekicks, Code Orange, Spraynard and Touche Amore frontman Jeremy Bolm.

Placeholder's Brandon Gepfer wrote his own response on The Runout, saying:

I get that some people want to have fun, and I've been stage diving since 2006. I used to go to the Wonder Years' shows, too. It's totally cool. The line gets drawn, however, when the performer says that it isn't cool. Why is it so confusing, rather; why is it so outrageous to listen? At the end of the day, you are an attendant at a show and you made the decision to support a band. However, there are a number of people, including bands that call Barry Johnson from Joyce Manor a 'pussy' and say that's not 'punk rock.' You know what's not punk rock? A disrespectful teenager calling someone a 'pussy' because you disagree with their view point.

This highlights the actual problem in punk rock. The attendees of the show think that they are owed something because they have an opinion. A lot of people got into punk rock because they were made fun of. I was called a 'pussy' from fifth grade all the way up until right now because of the opinions I hold, you know that simple opinion called equality. I hate the bro aspect of pop-punk and how these dorks infiltrated punk rock. The same type of people that beat me up as a kid listen to hardcore and punk rock now. They come to shows and hit people (not even dancing, just pushing each other for the hell of it), they jump off the stage literally every three minutes because I guess that's how they express themselves, I don't know.

The band's gotten support from many others too. Rookie Mag/Pitchfork Review editor Jessica Hopper tweeted, "THANK YOU @JoyceManor for respecting the rights and safety of show going teenage girl fans." Pitchfork's Ian Cohen tweeted, "@JoyceManor stays being the best." AltPress' Scott Heisel tweeted, "I stand with @JoyceManor on this one. Stage-diving = inconsiderate, selfish and potentially harmful. That's not punk." And plenty of others on Twitter expressed favorable opinions like "Thank you @JoyceManor Girls to the front!," and "Bless Joyce Manor's tweets right now. Fuck those huge dudes that stage dive & crush everyone in the crowd, especially tiny girls," and "Major respect to @JoyceManor, i was the one at fault for not giving a 200lb sweaty dude a boost up on my shoulders so he could crowdsurf."

People getting overly and unnecessarily rowdy and violent at punk shows has been happening since at least the '80s -- most people reading this probably know Fugazi is famous for taking a stand against it -- and of course this is part of why people feel confident refuting Joyce Manor by saying something along the lines of "that's just what happens at punk shows." But just because it's gone on for over two decades doesn't mean it's wrong to still take a stand against it. In 2011 I saw Screaming Females ask their crowd to calm down. After the crowd didn't listen and ended up breaking one of the band's drum stands, they walked off stage as at least one person sarcastically yelled "Fugazi!" at them. Earlier this year Titus Andronicus said something about it at a Brooklyn show and Joanna Gruesome did too. And it's not unrelated that Tigers Jaw and Pity Sex had to ask fans not to touch someone without consent, only for them to be made fun of much like Joyce Manor has been.

Watch the video of Joyce Manor's Jacksonville incident below...