Marissa Nadler in Chicago in 2011 (more by Ben Rodig) 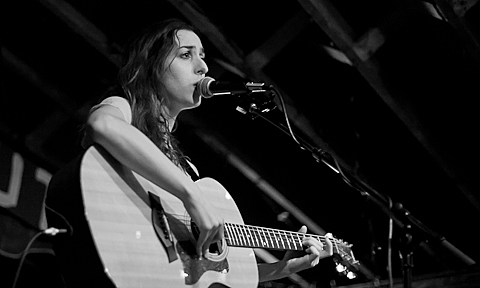 As mentioned, lutenist Jozef Van Wissem and guitarist/film director Jim Jarmusch, who put out two albums in 2012, followed by Apokatastasis and a contribution to the Sacred Bones RSD comp this year, are playing a show at Mercury Lounge on May 7 with drone guitarist Noveller (who also plays the Drone Activity In Progress show tonight [5/2]). Tickets for the Mercury Lounge show are still available.

Before Jozef heads over to Europe for a tour there, he'll squeeze in a solo gig happening in NYC at Brooklyn's Saint Vitus Bar on May 12 with a great lineup of dream folk singer Marissa Nadler and Entrance Band frontman Guy Blakeslee (who sang on Jozef & Jim's contribution to the Sacred Bones comp). Tickets for that show are on sale now. The Saint Vitus show is Marissa Nadler's only currently announced date other than Canadian festival MoSoFest, which she plays this June.

Jozef also has a new record out this year, Nihil Obstat. Though this one's a solo record, Jim Jarmusch does appear on it. You can stream the track "Where You Lived And What You Lived For" from the album over at NPR. Jozef will celebrate the album in NYC after his European tour with a release show on June 30 at Union Pool. No advance tickets for that show at the moment.

All dates are listed, along with Jozef Van Wissem & Jim Jarmusch and Marissa Nadler videos, below...

Marissa Nadler - "Thinking Of You"