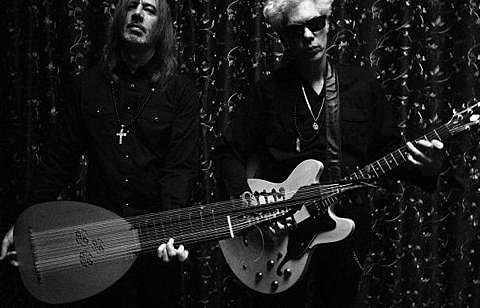 As mentioned, Jozef Van Wissem and Jim Jarmusch are releasing their second album of 2012, The Mystery of Heaven, on November 13 via Sacred Bones. We've already posted the video for "The Sun of the Natural World is Pure Fire," off of that album, and the duo have since revealed a stream of another track, "Etimasia." You can listen to that below.

Jozef Van Wissem has some solo shows scheduled, including the previously mentioned show at Issue Project Room TONIGHT (10/4) with guitar great Loren Connors and Clint Heidorn. At that show, Loren will be performing duets with both Jozef and Clint.

Jozef also plays the Life or Death CMJ showcase at 92YTribeca on October 20 with Twerps, Mac DeMarco, Prince Rama, Slug Guts, Maria Minerva, Sky Ferreira, DJs Poolside and Disco Phantom and special surprise guests. Tickets for that show are on sale now or you can try to get in with your CMJ badge.

About a month after CMJ, Jozef and Jim will team up for a show in NYC at Le Poisson Rouge on November 27 with Marissa Nadler. Tickets for that show are on sale now. It's the only announced date for Marissa Nadler at the moment.

A list of all dates, video, and song stream below.