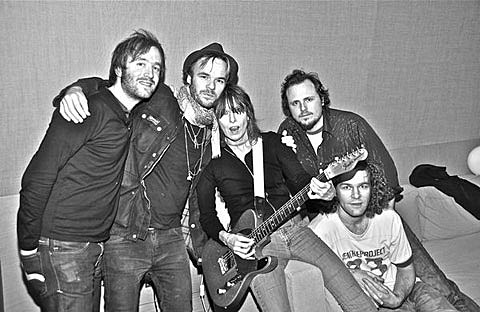 "J P, Chrissie and the Fairground Boys - Biography by Chrissie Hynde I first met J. P. Jones in London, November 2008. I was propping up the bar on my own at a party at The Double Club in Highbury.. I was about 5 screwdrivers in when some scruffy boy-band looking guy sauntered over to the freebie bar.. He was pretty hammered too, but we managed enough of a conversation for me to ascertain that he was a musician; recently gone solo after his band 'Grace' split, and grew up on a fairground in Wales... [stuff happened].... The Fairground Boys are, Patrick Murdock on guitar, Vezio Baccio , bass, Geoff Holroyde , drums and Sam Swallow on piano /keyboards. Chrissie Hynde , January 2010

Their first gig was in April in LA. Their next gig is in Brooklyn TONIGHT (6/2)...

ALPHA REV
Performing the title track & other songs from their latest release, "New Morning," as heard on 101.9 RXP

FREE ADMISSION!
DONATIONS REQUESTED
All proceeds collected at the door from this show will be donated to
Stray From The Heart, a non-profit dog rescue organization whose mission
is to rescue, rehabilitate and place homeless dogs with loving new families.

** THE FIRST 50 PEOPLE TO MAKE A DONATION OF $20 OR MORE WILL RECEIVE
A LIMITED-EDITION JP, CHRISSIE & THE FAIRGROUND BOYS T-SHIRTS! **