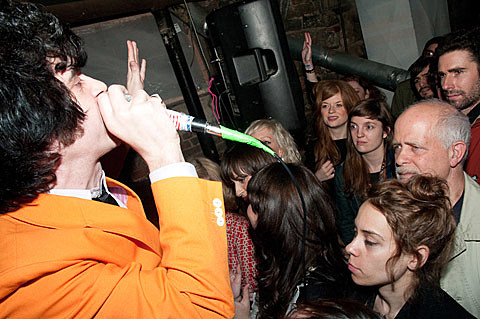 Like many other venues have been doing, Brooklyn's Music Hall of Williamsburg is hosting a Jonathan Toubin benefit which is taking place on January 12. The benefit's got a stacked bill including Chain and the Gang (whose frontman Ian Svenonius DJ'd a JT benefit at Zebulon on Christmas Eve), Eleanor Friedberger (who recently played the BV Holiday Party at the same venue), Shilpa Ray, Nicole Atkins, Two Tears, 5 Dollar Priest, Dorit Chrysler and Theremin, and An American Dream. There will also be DJ sets by JG Thirlwell (aka Foetus) and Jim Sclavunos (Bad Seeds/Grinderman) who both play the Here Comes the Warm Jets show at Joe's Pub in January and a DJ set by Mick Collins, who fronts The Dirtbombs, and whose other band The Gories are playing two shows in NYC this January. Tickets for the MHOW show are on sale.