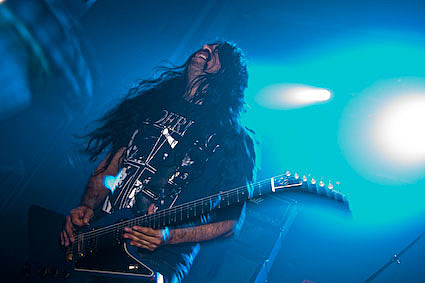 According to Lambgoat, and seemingly validated by the band's MySpace page (peep the "band members" section), guitarist Juan Montoya is no longer with Torche. Information is limited, but according to one message board poster, the band said,

We havent made a real announcement about it yet but we will. Juan is no longer playing with us due to lots of personal reasons. We'll be a three piece for a while. Did it two nights in a row and we think it was excellent. Sorry if anyone's bummed out. We're not.

According to a poster on Lambgoat who was at the show on November 24th in Gainseville, FL, "Torche played as a 3-piece (they're typically a 4 piece, right?) and the singer/guitarist had a fresh black eye." This news comes as Torche's 2008 album Meanderthal continues to be lauded by critics. Decibel Magazine named it album of the year. Pitchfork's Show No Mercy listed it at #2.

Juan Montoya, while he was in Torche, recently interviewed Harvey Milk's Steven Tanner for Revolver. You can read that HERE. All tour dates, and videos of Torche playing as a trio in Orlando on November 25th, below...