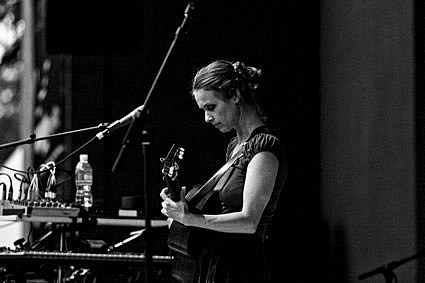 For the uninitiated, Juana Molina grew up in Argentina and was exiled to Paris with her family at the age of 12. Her father is THE coolest of cool old school Tango singers and her mother, an actress. Juana herself spent many years as a comedic TV star in South America, but made a complete break with acting at the height of her fame to return to music (a move that, which must be noted, was met with nothing short of hostility back home).

Juana Molina will play a Wordless Music series show tonight (2/27) at (Le) Poisson Rouge in NYC, with composer Lukas Ligeti (yes, son of György). Tickets are still on sale. Molina, who sings in Spanish, embelishes the trancelike elements of language in electronic/acoustic compositions that are equal parts hypnotic and melodic.

Last week, Molina stopped by Morning Becomes Eclectic on Santa Monica's KCRW for a live set and extended conversation. Molina, who played Prospect Park with Feist last summer, released her fifth full-length, Un Dia, in October on Domino Records. You can download one track off that album above.

All tour dates and a video below...