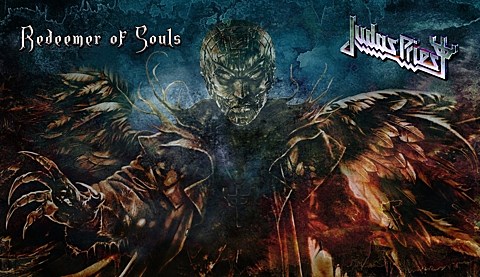 Iconic UK heavy metallers -- and totally not 'death metal' -- Judas Priest unveiled a song and accompanying artwork for their next album Redeemer of Souls, due out in the US on July 15th via Epic Records. The record will be their 17th studio full-length over a 44 year career. Their last LP, the double disc Nostradamus, was released in 2008 and took on greater relevance as the final album featuring guitarist Glenn Tipton's partner in shred, K. K. Downing.

Downing, who quit Priest in 2011 in not the most amicable fashion, had been a mainstay since the band's birth in 1970. The split severed one of metal's most recognizable and formidable twin-guitar attacks. Downing was replaced by Richie Faulkner, who makes his studio debut with the band on Redeemer of Souls.

The result? "Redeemer of Souls" is four minutes of standard Judas Priest, utilizing their trademark stuttering strut to power towards a rousing chorus. The production takes a step back in the direction of trad, cutting the fat of prior indulgences for a midpaced rumble. It's ship-righting stuff. Check out the stream below and let us know if this new iteration is worth carrying the torch.